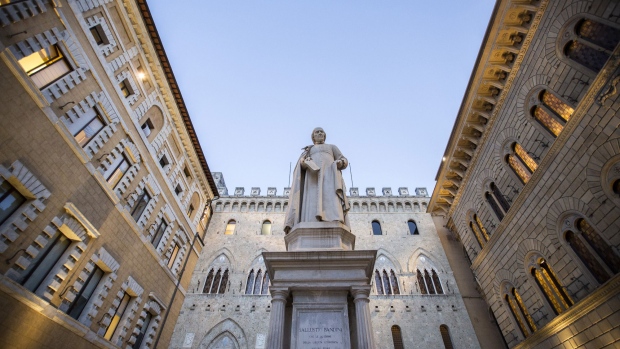 The statue of Sallustio Bandini, an economist and politician, stands in Piazza Salimbeni in front of the Monte dei Paschi di Siena SpA bank headquarters in Siena, Italy, on Friday, Dec. 16, 2016. The bank will begin taking orders for shares Monday as it aims to complete raising 5 billion euros ($5.2 billion) by the end of the year to avoid a rescue by the Italian government. , Bloomberg

(Bloomberg) -- The Italian government and UniCredit SpA are making progress in talks on a deal for the takeover of troubled lender Banca Monte dei Paschi di Siena SpA and could sign a preliminary accord by the end of the year, people familiar with the matter said.

The Rome-based Finance Ministry is working to meet UniCredit’s demands in a deal that may cost the state more than 10 billion euros ($12 billion), said the people, asking not to be named because the process is private.

Talks are expected to accelerate after elections for a parliamentary seat in Siena -- where Monte Paschi is based -- on Oct. 3 and Oct. 4, the people said. The details of the sale won’t be finalized until after the vote, they said. While the sale remains the primary plan for Italy’s government, talks could still fail.

Italian newspapers earlier this week cast doubt on the notion of progress toward a deal, with daily La Stampa reporting that Italy was weighing a backup plan without UniCredit. Added conditions from UniCredit and pressure from political parties risked putting a deal on hold, Stampa said.

A timeline producing a deal by the end of 2021 would allow UniCredit to benefit from a tax break introduced last year for mergers and acquisitions in the banking industry. Closing a deal that qualifies for the measure, which expires at the end of this year, would be worth billions of euros to UniCredit.

The government led by Prime Minister Mario Draghi has been working for months on a plan to sell Monte Paschi, the world’s oldest bank, which the state bailed out in 2017.

But progress has been slowed by political opposition and the upcoming vote in Siena, where the electoral campaign has focused on the future of the lender, a big employer in the region.

Voters in Siena will select a lawmaker to replace Pier Carlo Padoan, a former finance minister who last year stepped down from the region’s seat in parliament to become chairman at UniCredit.

Democratic Party leader Enrico Letta has joined other candidates for the seat in insisting that a deal with UniCredit should be pursued only if it doesn’t come at too steep a price for Italy.

Indeed, meeting Orcel’s conditions could prove costly, with the possibility of thousands of job cuts, many at the bank’s Siena headquarters. And for local residents, the loss of an iconic brand could be even harder to swallow.

A deal with UniCredit might not include the Monte Paschi name, which many in Siena see as a symbol of the city and its surrounding region, meaning the brand could simply disappear, according to people familiar with the talks. That’s further fueled political opposition to a deal.