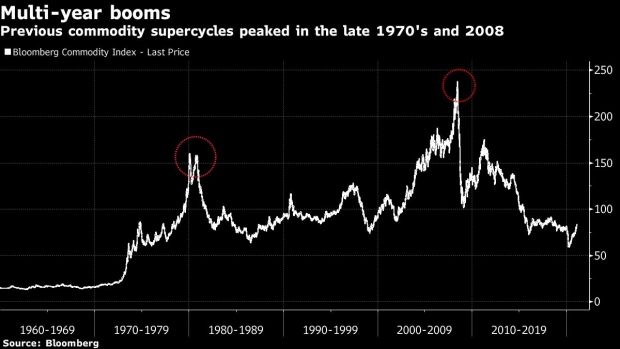 (Bloomberg) -- Oil and other commodities have probably entered a so-called supercycle as a post-pandemic economic rebound and swelling inflation spark expectations of rising demand, according to JPMorgan Chase & Co.

Prices could also jump as an “unintended consequence” of the fight against climate change, which may constrain oil supplies while boosting demand for metals used in the construction of new renewable infrastructure, batteries and electric vehicles, JPMorgan analysts led by Marko Kolanovic said in a report on Wednesday.

“The past decade was marked by low growth and low inflation,” Kolanovic and company wrote. “Bonds, bond proxies and secular growth stocks were in a bull market, while commodities, value and cyclical stocks performed poorly. We believe that the tide on yields and inflation is turning.”

Over the past century, there were four commodity supercycles. The last one, driven by the economic rise of China, started in the 1996 and peaked in 2008, the analysts wrote.