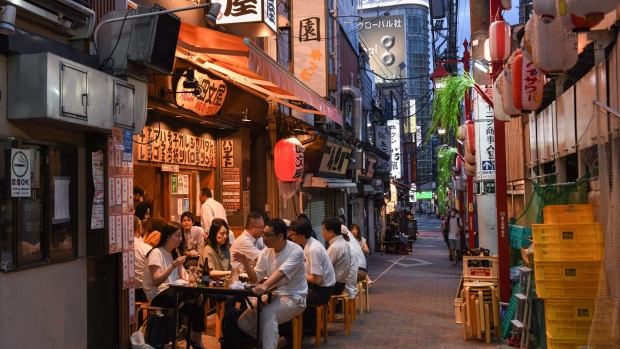 Customers at a bar in the Shinjuku district of Tokyo, Japan, on Thursday, July 29, 2021. While the number of infections directly connected with the Olympics has so far been relatively low, Tokyo and its surrounding areas are experiencing their worst-yet virus wave. , Bloomberg

(Bloomberg) -- A campaign by Japan’s tax agency to prop up alcohol revenue by encouraging young people to drink up has met fierce backlash on social media, with users criticizing the taxman for dictating people’s lifestyle choices.

The National Tax Agency’s “Sake Viva!” idea competition, which is seeking business plans from young people or groups to help “revitalize” the nation’s liquor industry, was launched in July and gained traction on Twitter this week after local and overseas media outlets reported the move.

Brewers in the country have struggled to arrest a decline in alcohol sales due to more health-conscious consumers, an aging society and changing tastes among the young. A sharp fall in alcohol sales at restaurants and bars during the Covid-19 pandemic has seen producers resort to promoting even lower-alcohol products, while rising inflation is further squeezing profits.

The “Sake Viva” hashtag on Twitter was filled with heated responses. One user called the campaign “ridiculous,” saying young people avoiding alcohol should be perceived as a good thing. This sentiment was followed by others, some users noting the campaign appeared to be at odds with health ministry guidance that encourages moderate drinking.

Japan collected about 1.1 trillion yen ($8 billion) in tax from liquor sales, or around 2% of total tax revenue in fiscal 2020, down 13% from 2016, according to tax agency data. The volume of alcohol taxed has steadily shrunk to 7.7 billion liters as of 2020, down nearly 10% from a decade ago, estimates from the tax agency show.

Already saddled with the largest debt burden in the industrialized world, Prime Minister Fumio Kishida’s government has been struggling to rein in spending while tending to the rising demands of an aging population. Earlier this year, the government loosened its commitment to balance its budget by the end of fiscal 2025.

The competition, which will take applications from anywhere in the world as long as they’re in Japanese, closes on Sept. 9. Finals are scheduled for Nov. 10 in Tokyo. Participants are encouraged to suggest promotional methods targeting the young or tapping artificial intelligence and the metaverse to boost sales.

Japan’s health ministry said that while it wasn’t involved in the campaign, it understood the spirit of the promotion was in line with its view that people should “drink responsibly.”

The National Tax Agency said in response to queries from Bloomberg News that the campaign aims to promote the alcohol industry at a time when issues ranging from Covid to a shrinking population mean fewer young people are drinking. It’s a business promotion to encourage growth and “in no way is it encouraging people to drink excessively,” the agency said.