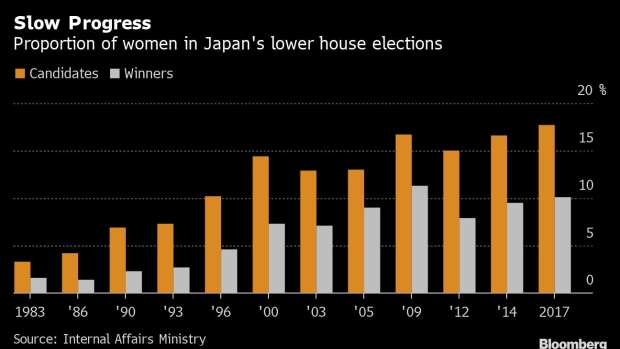 The National Diet building in Tokyo, Japan, on Monday, Jan. 18, 2021. Japanese Prime Minister Yoshihide Suga vowed in a speech to parliament to overcome the latest wave of coronavirus infections and laid out environmental and digitization plans he said would bolster the economy. Photographer: Kiyoshi Ota/Bloomberg , Bloomberg

(Bloomberg) -- Less than a fifth of candidates in Japan’s upcoming election are female, unchanged from the last vote four years ago, indicating the percentage of women in one of the world’s most male-dominated parliaments is unlikely to increase.

More than 1,000 candidates are running for 465 seats in the Oct. 31 election but only 186 are female, data released early Wednesday showed. While an unprecedented two out of four candidates in a vote for leadership of the ruling Liberal Democratic Party last month were women, efforts to improve gender parity in national politics have made scant progress.

As in the past, a strong result for the LDP is likely to mean fewer women take up seats in the lower chamber. Less than 10% of LDP candidates are female, compared with more than 18% for the main opposition Constitutional Democratic Party. The Japanese Communist Party has the highest proportion of female candidates, at about 35%.

That’s despite a 2018 law that requires political parties to make efforts to field similar numbers of male and female candidates. Japan’s cabinet last year approved a Gender Equality Bureau plan target of having women make up 35% of parliamentary candidates by 2025.

“Since the law contains no enforceable quotas or penalties, the LDP can ignore it,” said Gill Steel, a professor of political science at Doshisha University in Kyoto, adding that she doesn’t see the LDP as prioritizing the recruitment of women.

While women struggle to reach leadership positions in many sectors in Japan, the problem is particularly acute in politics. Before parliament was dissolved for the election, just 10% of members of the lower house were female, placing the country 165th in the Inter-Parliamentary Union’s global ranking of female representation of 192 countries. That was also the lowest among the Group of Seven nations, all of which were at about 28% or higher.

Minister for women’s empowerment Seiko Noda blamed the lack of change on the LDP’s policy of keeping incumbent lawmakers in place.

“I’m working really hard on this,” she told reporters last week. “But the vast majority of incumbents are male and I have to admit I couldn’t push back against that to get women instead.”