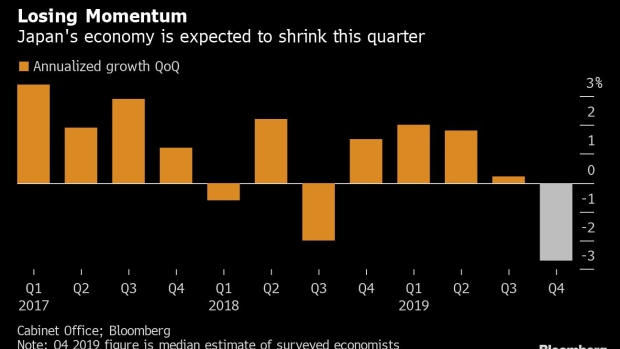 Vehicles travel through an intersection as buildings and retail stores stand illuminated at dusk in the Akihabara shopping district of Tokyo, Japan, on Wednesday, July 24, 2019. Japan is scheduled to release consumer price index (CPI) figures on July 26 and retail sales figures for June on July 29. Photographer: Toru Hanai/Bloomberg , Bloomberg

A draft of a government stimulus package obtained by Bloomberg sets out the need for spending on upgrading disaster-prevention infrastructure, an extension of a cashless rebate program and information technology help for small and mid-sized companies that are raising wages.

The draft didn’t set out how much money would be spent on the measures, but a senior Abe administration official said the stimulus would easily top 10 trillion yen ($92 billion).

“The feeling I got was that the economic measures would go far beyond 10 trillion yen in scale and that overall working size would be about 25 trillion yen,” said Liberal Democratic Party policy chief Fumio Kishida.

The effective punching power of the stimulus package won’t be clear until specific figures are given for actual spending and the size of an extra budget to fund it. Overall figures for spending packages typically include loans and assistance from the private sector.

A package in August 2016 had a headline size of 28.1 trillion yen, but the extra budgets financing it that year amounted to only 3.5 trillion yen, an amount that the latest package is expected to exceed.

With his first major stimulus package since 2016, Abe seems intent on maintaining his economic legacy as Japan’s longest serving prime minister. While Japan’s labor market is close to its strongest in almost three decades and domestic demand has kept the economy expanding despite the global slowdown, the economy still faces risks from U.S.-China trade tensions and October’s sales tax hike.

To contact the editors responsible for this story: Malcolm Scott at mscott23@bloomberg.net, Paul Jackson