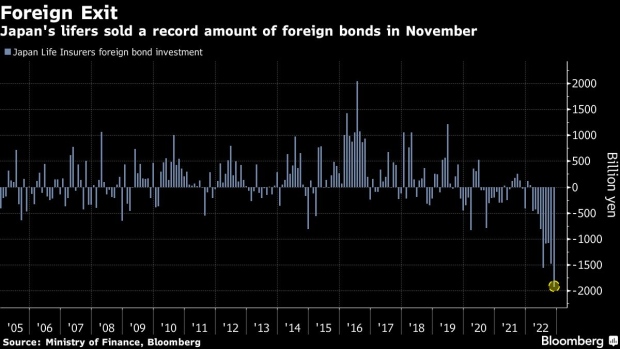 (Bloomberg) -- Stung by crippling hedging costs and tempted by higher yields at home, Japan’s life insurers are bailing out of foreign bonds at a record pace.

The cohort offloaded a net 1.9 trillion yen ($14.1 billion) of overseas debt in November, an all-time high, according to preliminary portfolio flow data from Japan’s Ministry of Finance on Thursday. Separate balance-of-payments data for October showed Japanese investors overall were net sellers of US, French and German debt.

Global bonds rebounded in November as investors bet that central banks are getting a grip on inflation.

The cost to hedge positions against swings in the yen has surged this year after the currency slumped to a three-decade low amid a widening yield differential between the US and Japan and the latter’s deepening trade deficit. A three-month hedge against the dollar costs about 4.9%, according to data compiled by Bloomberg.

That has made Treasuries deeply unprofitable for Japanese investors — the largest overseas holders of US debt — among whom insurers play a high-profile role.

On a three-month yen-hedged basis, 10-year Treasuries offered a negative return of about minus 1.5% on Wednesday, compared to a yield of almost 1.5% on 30-year Japanese government bonds.

While the yen has already seen a strong rebound from its October low, expectations for further gains make it unlikely Japanese investors will rush back into foreign securities.

“Life insurers will be reluctant to buy foreign bonds unhedged considering the rising risk of yen appreciation,” said Ueno. “I’m focused on whether they will shift further to yen bonds from foreign debt.”