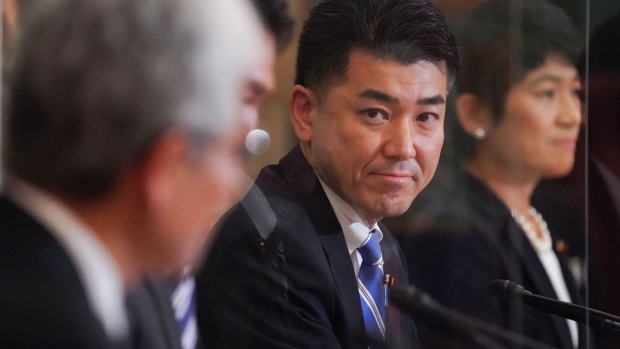 Kenta Izumi, policy chief of the Constitutional Democratic Party of Japan, center, during a debate ahead of the leadership election of the Constitutional Democratic Party of Japan at the Japan National Press Club in Tokyo, Japan, on Monday, Nov. 22, 2021. The leader of Japan's main opposition party Yukio Edano has stepped down from his post this month after his group suffered a stinging setback in a national election. , Bloomberg

The Constitutional Democratic Party vote was held Tuesday after the previous leader, Yukio Edano, stepped down to take responsibility for the poor showing in the national election about a month ago. Under Edano’s leadership, the party regularly failed to dent support for the dominant Liberal Democratic Party, even when the ruling party’s support slipped over scandals and perceived stumbles in Covid-19 crisis management.

Izumi, 47, faces a struggle to make inroads against Kishida’s LDP, which has been in power almost continuously since 1955. His election comes after he expressed doubts about his left-leaning CDP’s electoral cooperation with the Japanese Communist Party, which is described by the National Police Agency as “the largest revolutionary organization in Japan.”

That alliance is seen as having alienated some voters. The Oct. 31 general election saw the CDP lose about 12% of its seats in parliament, while the right-wing Ishin group almost quadrupled in size and is now the second-most popular party in some polls.

A survey published by the Mainichi newspaper earlier this month found 43% of respondents said the CDP shouldn’t continue its cooperation with the communists in the run-up to an upper house election next year, compared with 19% who said it should.

While none of the CDP leadership candidates rejected cooperation with the communists outright, Izumi criticized the strategy to broadcaster Fuji TV on Sunday.

The CDP is the successor to the Democratic Party of Japan, which toppled the LDP in 2009, only to crash out of power just over three years later. The opposition has been in disarray since, with splinter groups forming and merging, but rarely attracting more than single figures in public support polls.

No comeback is imminent for the struggling CDP, Tomoaki Iwai, a professor of political science at Nihon University in Tokyo, said just ahead of the vote.

“The situation will remain very difficult for them,” he said, citing the lack of leaders with “star” quality as well as continuing disagreements within the party.