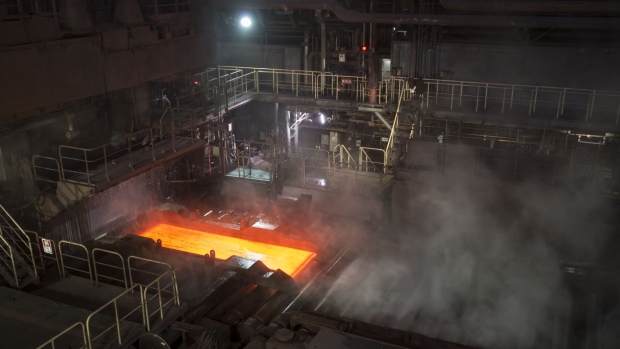 A hot steel slab moves along a conveyor of a plate mill at the Nippon Steel & Sumitomo Metal Corp. plant in Kashima, Ibaraki, Japan, on Wednesday, April 18, 2018. President Donald Trump and Japanese Prime Minister Shinzo Abe committed Wednesday to intensify bilateral trade talks. Trump is pushing for an agreement that would reduce the U.S. trade deficit with Japan, while Abe is seeking an exemption from the steel and aluminum tariffs that Trump announced last month. Photographer: Tomohiro Ohsumi/Bloomberg , Bloomberg

Japan’s steel suppliers are gaining the upper hand in a market where carmakers, their biggest customers, have typically had more bargaining power. Senior executives of the steelmaker have been increasingly vocal in seeking better terms for domestic contract prices to bridge the gap with international prices. Back in May, the president warned the company can’t take responsibility for stable supply unless unreasonably low domestic prices are corrected.

Mori said domestic steel users have broadly accepted calls by the company to raise contract prices to reflect cost surges. Nippon’s average price for its products sold both overseas and at home rose to the highest since at least 2008 in the three months through September amid tight supply and robust demand.

The steelmaker is also trying to bring more changes in the way contracts are implemented, as part of its push to amend traditional business practices in Japan. It’s seeking to conclude talks before it begins delivery, shorten the contract terms to three months from six now and deliver products only after agreeing on prices, he said. Talks with buyers for the second-half for the year ending March typically end around February, although delivery starts before that.

The executive declined to elaborate on the details, including naming the customers or the size of the price hikes, saying the negotiations are private. Talks between Nippon Steel and Toyota Motor Corp. are held twice a year and are closely watched as they typically serve as a benchmark.

Mori expects the recovery in demand to continue, although the company will closely monitor the impact of the resurgence in coronavirus infections in some regions.

The World Steel Association said last month demand should climb again next year and the main driver of growth will be outside China as the country’s real estate crisis undermines consumption. Still, China’s drive to cut steel output to curb emissions alleviates the risk of a collapse in the world’s biggest market, Mori said.