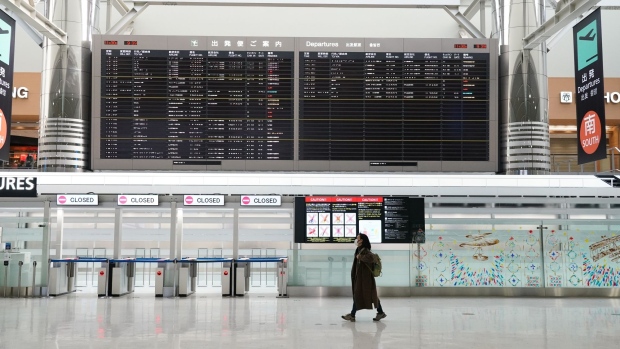 A woman wearing a protective mask walks past a flight information board in a departure hall at Narita Airport in Narita, Chiba Prefecture, Japan, on Tuesday, Nov. 30, 2021. Japan closed its borders to new foreign arrivals from Tuesday and have its own citizens isolate on arrival from countries where the omicron variant has been found, while experts around the world analyze the risks it presents. , Bloomberg

(Bloomberg) -- Japan is set to ban foreign residents who have visited South Africa or nine other nations from re-entry starting Thursday over fears about the omicron variant, Chief Cabinet Secretary Hirokazu Matsuno said.

The move toughens current coronavirus regulations that had barred only new foreign entrants, allowing non-Japanese who have legal residence to return provided they undergo a period of isolation at a government-designated facility. This was in line with the rules for the country’s own citizens.

The other nations affected will be Angola, Botswana, Eswatini, Lesotho, Malawi, Mozambique, Namibia, Zambia and Zimbabwe, Kyodo News said. No countries outside Africa were listed, despite the fact that omicron variant cases have been recorded in places including the U.K., Spain, Germany, Canada and Australia.

A man who returned to Japan from Namibia at the weekend has been found to be infected with the variant and is in quarantine. The Namibian diplomat in his 30s, who had been fully vaccinated with Moderna shots, developed a fever and was sent to a hospital for isolation, Yasuyuki Sahara, director of health services bureau at the health ministry, said in a briefing Tuesday.

There were 70 other passengers on the same flight that arrived at Narita airport outside Tokyo, he said. The family of the diplomat is in quarantine at a hotel, he said, adding all aboard the plane are being treated as close contacts.

Japan currently has some of the lowest levels of coronavirus infections in the developed world, with 124 daily new cases and one death recorded Nov. 30.