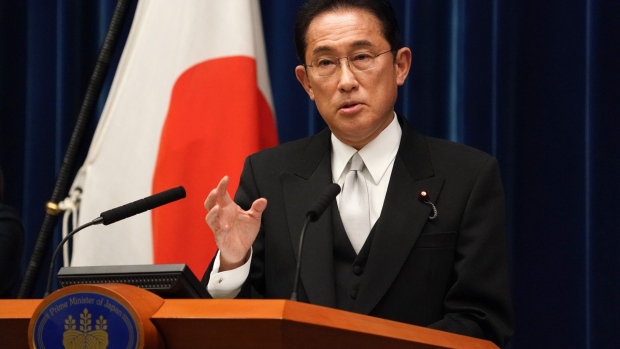 (Bloomberg) -- Japan’s powerful lower house of parliament is set to be dissolved Thursday in a formal step for an Oct. 31 general election that could determine how long Prime Minister Fumio Kishida remains in office.

The dissolution is set for about 1 p.m. in Tokyo in the move that sets the stage for a national election coming a little more than three weeks after he took office as premier.

Any major loss of seats could undermine Kishida’s ruling Liberal Democratic Party’s faith in his leadership, increasing the chances he’ll be dispatched through the “revolving door” that claimed six Japanese premiers between 2007-2012.

Kishida has said he wants to maintain his ruling coalition’s majority in the 465-seat House of Representatives, a modest target he’s almost certain to achieve. That would allow for a significant reduction in numbers, given that the LDP and its junior partner Komeito together controlled more than 300 seats before dissolution.

While none of the opposition parties boast support of more than single figures, they’ve forged an alliance that includes the Japanese Communist Party, which is cooperating in many constituencies to try to chip away at the ruling coalition’s majority.

Any major gains in seats for the group would add to troubles for Kishida, after some media surveys have shown him having the lowest approval ratings for a new leader since the financial crisis of 2008.

Kishida has focused his election pledges on building a “new capitalism” in which the fruits of economic growth are spread more widely. Markets initially gave the plan a thumbs down, sending Nikkei 225 Stock Average to its longest losing streak since 2009 at the start of this month.

He has distanced himself from an earlier proposal to increase a capital gains tax on securities investments following the market backlash. The premier’s policies include increasing pay for some public sector workers and strengthening tax breaks for companies that increase salaries. Kishida has nonetheless said he’ll maintain the easy monetary policy of his former boss, Shinzo Abe.

The new prime minister has promised an economic stimulus package amounting to tens of trillions of yen, to be drawn up after the election, as Japan seeks to shake off the effects of the pandemic. New virus cases are dwindling from an August peak and about two-thirds of the population are fully vaccinated.

Amid growing fears over tensions around Taiwan, Kishida has indicated he’ll continue to try to strengthen Japan’s alliance with the U.S. while maintaining dialogue with China, his country’s biggest trading partner.