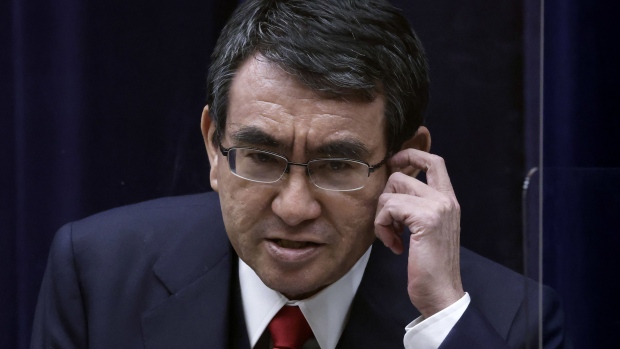 (Bloomberg) -- Japan’s vaccine czar Taro Kono declared his candidacy to replace outgoing Prime Minister Yoshihide Suga in a ruling party election later this month, saying he wants to create a country where no one is left behind.

Kono on Friday became the third lawmaker to officially stand in the Sept. 29 leadership vote for the ruling Liberal Democratic Party, following Suga’s decision not to run for re-election amid sagging public support. Due to the party’s parliamentary power, its leader is virtually assured of becoming premier.

Polls published earlier this week found Kono was the most popular option with the general public, a pressing concern because the new leader will face a general election by the end of November.

Kono, who has served in the foreign and defense ministry positions, is a fluent English speaker with millions of social media followers. In recent days he has backtracked on his past opposition to nuclear power, saying that atomic plants are needed to some degree to achieve Japan’s climate goals, Jiji Press reported.

Here are some highlights from his announcement: