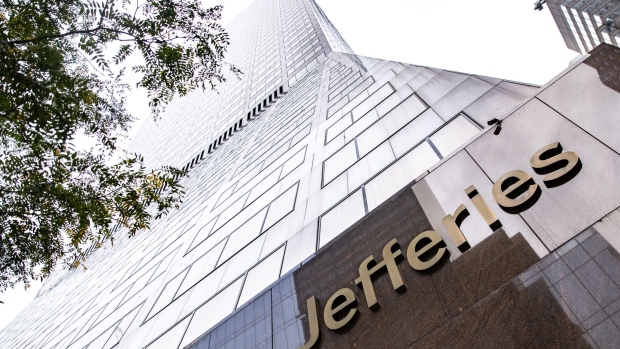 Signage outside the Jefferies Financial Group offices in New York, U.S., on Wednesday. Oct. 13, 2021. Jefferies, which has been expanding in Asia in recent years, saw its global revenue rise by 50% to a record $5.4 billion in the first nine months of the year. Photographer: Jeenah Moon/Bloomberg , Bloomberg

(Bloomberg) -- Jefferies Financial Group Inc. told staffers that the upcoming bonus season will be a “difficult” one following a volatile year across Wall Street.

“As always, we will do the right thing for the long-term success of everyone at Jefferies,” Chief Executive Officer Rich Handler and President Brian Friedman said in a memo to employees Thursday. “Let’s just spell it out here: ‘This is going to be a more difficult compensation season at Jefferies, just like it will be for every firm in our industry.’ We will work through the compensation process fairly, expeditiously and as transparently as possible.”

Year-end incentive pools are set to drop sharply across the finance industry amid a pullback in mergers and acquisitions, persistent inflation and the threat of a potential recession. Bankers advising on M&A are likely to see their bonuses decline as much as 20% this year, while their counterparts in underwriting will probably have the biggest drop, with their incentive pay slumping as much as 45%, according to Johnson Associates Inc.

New York-based Jefferies “has made major investments across the board” to strengthen its position in the market, Handler and Friedman said in the memo, which followed the end of the firm’s fiscal year Wednesday.

“These past 12 months have been incredibly volatile, frustrating, confusing and somewhat exhausting,” the executives wrote. “Because of how we dealt with a very challenging 2022, we are one of the handful of investment-banking firms in our industry that can honestly claim that there is nothing in our way to having a great 2023, environment permitting.”