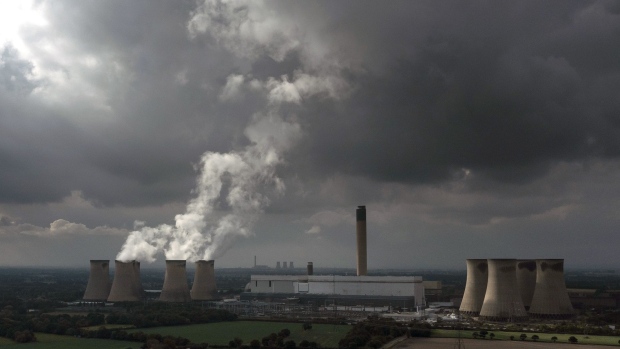 (Bloomberg) -- Boris Johnson has said his priorities at COP26 will be ending coal power and raising climate cash. Two weeks out from the start of negotiations in Glasgow, Scotland, the signs aren’t looking good.

The latest exhibit: a meeting of Group of 20 officials on Friday that aimed to start hashing out an agreement that’s crucial to COP ended in gridlock. There was no consensus on bringing an end to coal use, or even aiming for net-zero, and people familiar with the meeting said positions had grown further apart in recent months.

What’s happened in the time since leaders last met to talk climate is key: the gas crisis is throwing into sharp relief the importance of energy security and the risks of giving up fossil fuels before alternatives are ready to pick up the slack. China has ordered miners to dig up as much coal as they can, and even the U.K. is using more coal-fired power.

As COP President Alok Sharma tries to cajole 197 countries into an agreement to cut emissions -- and keep on cutting them deeper in the years ahead -- he has to contend with a series of key no-shows. Chinese President Xi Jinping isn’t expected to attend. Neither is Brazil’s Jair Bolsonaro -- a major player because of the importance of the Amazon basin as a carbon sink and its role in any global carbon market. Prime Minister Narendra Modi of India -- the world’s third-biggest emitter and a holdout in recent efforts to broker agreements -- has also yet to confirm.

U.S. President Joe Biden will be there, but even his climate envoy John Kerry -- who has been touring the globe trying to persuade countries to take more ambitious steps -- was managing down expectations this week.

Without those funds, it’s almost impossible for progress to be made. But the rich countries are still 10% short of reaching a decade-old promise to mobilize $100 billion a year, according to people familiar with the matter. Developing nations such as Bangladesh and Indonesia say they can’t step up their climate pledges without more money. Some of the nations most vulnerable to climate change are also the poorest.

In more foot-dragging, several countries have still failed to submit their climate homework ahead of the summit. Governments are meant to publish plans -- known as nationally determined contributions -- on how they will play their part in slowing global warming. China and India are among those who haven’t.

There are some small wins. In Germany a potential new coalition government said it would ditch coal eight years earlier than planned. Japan also confirmed plans to improve its climate targets, saying it would cut emissions 46% by 2030 compared with 2013 levels. Turkey ratified the Paris Agreement six years after it was forged. And Russia unveiled a net-zero target for 2060, but offered no details of how it would get there.

The trouble for COP negotiators is that in climate talks, the details matter.