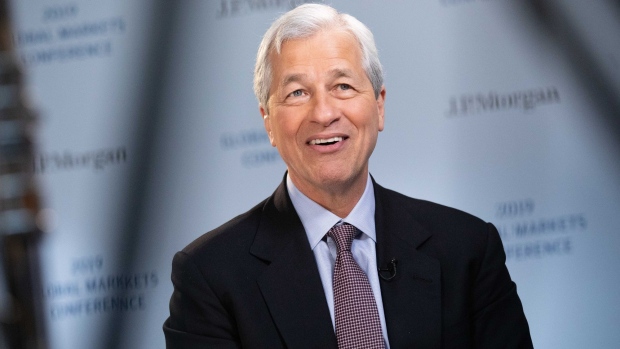 The pay package includes $28 million of restricted stock tied to performance, an annual base salary of $1.5 million and a $5 million cash bonus, the biggest U.S. bank said Thursday in a regulatory filing. Dimon, 65, was paid $31.5 million a year for both 2020 and 2019.

“Amid the continued challenges of Covid-19 and supply chain disruptions, under Mr. Dimon’s stewardship, the firm continued to serve its clients and customers around the world,” the bank said in the filing. It did so “during a time of unprecedented business demands, while supporting and providing a safe work environment for its employees and investing in and executing on strategic initiatives.”

The move is the latest sign that banks are paying their most senior leaders more as well, after compensation pressures emerged last year from the junior ranks up through the banking and trading hierarchy. Firms were forced to raise salaries for burned-out junior bankers and are paying higher bonuses after showing restraint in 2020.

Both Dimon and his top deputy, Daniel Pinto, were awarded special bonuses last year to entice them to stay in their roles for a “significant number of years.” In an October interview with Axios’s HBO program, Dimon described his pay as part of a broader “umbrella” designed to retain senior management.

JPMorgan earned $48.3 billion last year, a 66% jump from 2021. Nearly $10 billion of that came from reserve releases after potentially soured loans predicted at the start of the pandemic never materialized. The firm also benefited from a historic deal boom, which helped fuel its best-ever year for investment-banking fees.

Dimon has led JPMorgan since 2005 and is the most prominent executive in global banking, serving as a spokesman for the industry. He has usually been the highest-paid of the major U.S. bank CEOs in recent years, but last year was bested by Morgan Stanley’s James Gorman, who was paid $33 million for 2020. JPMorgan is the first one of the group to disclose 2021 pay.