JPMorgan Chase & Co.’s results were one more marker of the disconnect between ebullient markets and concern about the U.S. economy.

The biggest U.S. bank said second-quarter profit fell 51 per cent to US$4.69 billion, a smaller drop than forecast, as record trading revenue helped counter the biggest loan-loss provision in the firm’s history. It’s the second consecutive quarter that trading set a record, as the bank’s Wall Street unit is helping prop up a consumer-lending division struggling with business closures and swelling unemployment rolls.

The results didn’t show as much impact from the global economic slowdown as analysts expected, in part because of government stimulus programs that provided a cushion to consumers and businesses. JPMorgan’s executives said they are girding for more pain ahead.

“This is not a normal recession,” Chief Executive Officer Jamie Dimon said on a conference call. “The recessionary part of this you’re going to see down the road.”

The firm’s fixed-income trading revenue doubled from a year earlier and the equity-markets unit surged more than 30 per cent as trading desks benefited from a roller-coaster year. After the pandemic drove stocks into the fastest bear market ever in March, the S&P 500 mounted one of the biggest rallies in nine decades, boosted by stimulus measures and optimism over a swift economic rebound.

Fixed-income traders generated US$7.3 billion, a figure that by itself would have set a record for overall trading even if the equities group produced nothing.

Dimon said there’s little chance the bank will have to cut its dividend, “unless the economic situation deteriorates materially and significantly.”

JPMorgan was the only major Wall Street bank that didn’t suffer a loss during the financial crisis, and the second-quarter results offer a hint at what’s to come when the rest of the largest U.S. lenders report this week. The four biggest U.S. banks’ combined earnings are expected to have fallen to the lowest in more than a decade in the second quarter, according to analyst estimates compiled by Bloomberg before Tuesday’s results.

The bank generated US$9.72 billion from trading stocks and bonds, 79% more than a year earlier and a bigger jump than analysts were expecting. That and a 91 per cent gain in investment-banking fees helped the company easily remain profitable even as it set aside US$10.5 billion to cover future bad loans, a record that was also higher than estimates.

Citigroup Inc. fell 1.4 per cent after reporting results that included a surge in bond-trading revenue but also predictions for a slower economic rebound and a wave of potential defaults. Wells Fargo & Co. slid 7 per cent after the bank reported its first quarterly loss since 2008 and cut its dividend more than analysts expected. 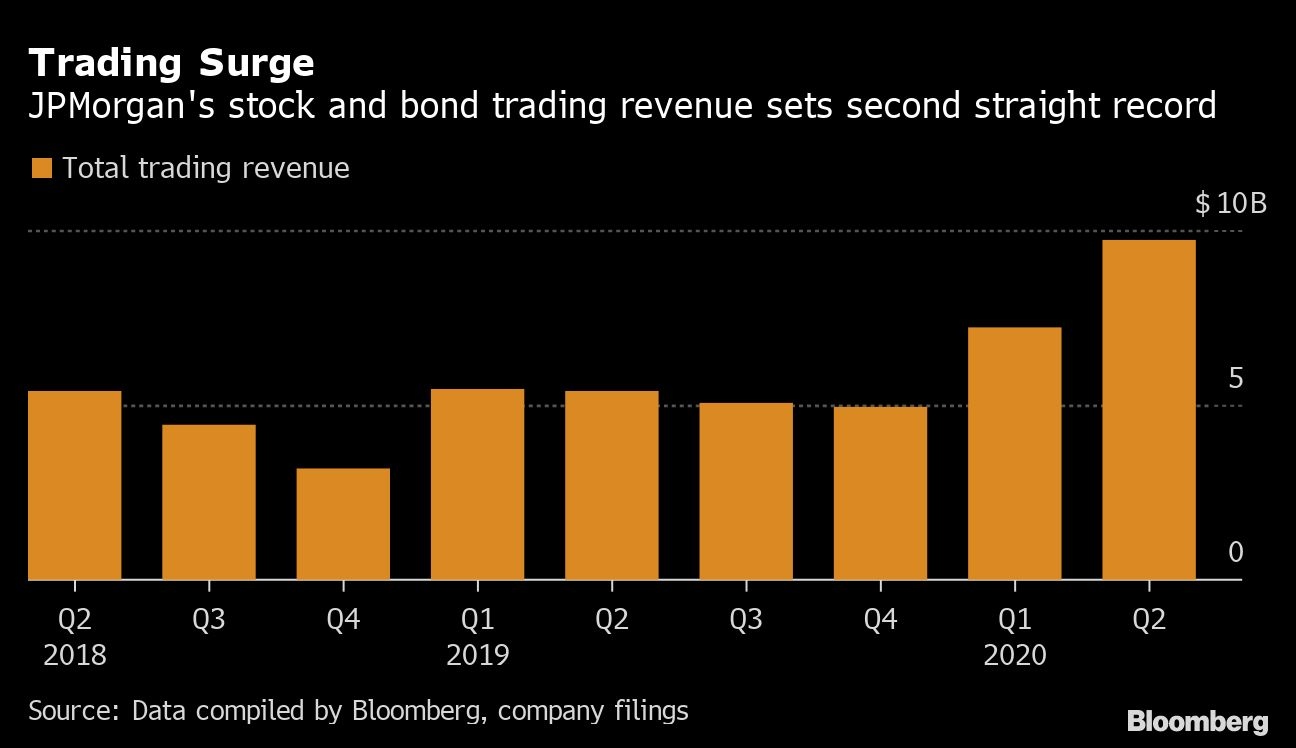 Despite the surprise profit win, JPMorgan’s balance sheet is showing more signs of stress than it did at the end of the first quarter, when stay-at-home orders were still just a few weeks old. Net charge-offs, overdue loans the bank no longer expects to recover, rose six per cent from the first three months of the year to US$1.56 billion in the second quarter. But that was far less than the US$2.78 billion predicted by analysts.

“Next year will be much heavier on charge-offs,” Chief Financial Officer Jennifer Piepszak said on the conference call.

Loan defaults could start to surge in the second half of the year as the effect of the government’s stimulus measures and the bank’s loan-deferral programs start to wear off.

Revenue rose across all of the bank’s business lines except the consumer unit, where it fell nine per cent from a year earlier to US$12.2 billion. The business reported a loss of US$176 million amid higher credit costs and a drop in loans. The loss for the unit, which has historically been the bank’s most profitable business, was its first since at least 2011, which was before the bank combined its retail and credit-card groups.

Net interest income slipped four per cent to US$13.9 billion in the second quarter as the impact of lower interest rates offset a two per cent increase in the bank’s total loan book compared with last year. The bank on Tuesday also kept in place its outlook for full-year lending income after raising it two months ago to US$56 billion.

--With assistance from Payne Lubbers.