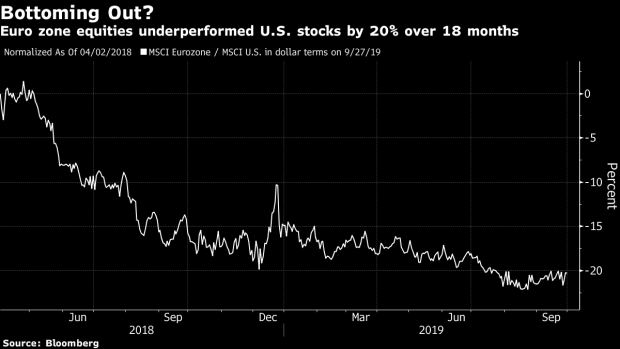 A European Union (EU) flag stands on a balcony as company stock price information is displayed on a screen hanging over the Euronext NV Paris stock exchange trading floor in La Defense business district of Paris, France, on Wednesday, Jan. 16, 2019. European investors shook off the rejection of U.K. Prime Minister Theresa May’s Brexit deal in parliament ahead of a confidence vote, opening higher after mixed markets in Asia, and gains in the U.S. Photographer: Christophe Morin/Bloomberg , Bloomberg

(Bloomberg) -- There’s been a significant change of heart from JPMorgan equity strategists: U.S. stocks are no longer preferred to Euro-area equities.

“There is a tactical opportunity opening up for Euro zone to catch up,” strategists led by Mislav Matejka wrote in a note.

The 20% underperformance of the region’s stocks in dollar terms over the past 18 months, combined with investment outflows amounting to 20% of assets under management, are part of the reason the strategists upgraded the Euro-area region to overweight, while downgrading the U.S. to neutral.

The valuation discount has widened and the relative price-earnings ratio is now close to “outright cheap” territory, JPMorgan says. Value stocks have shown some signs of revival this month, and the continuation of a sector rotation from growth into value is also likely to support Euro area outperformance against the U.S., according to the strategists.

That’s not all. The poor macro backdrop in Europe is likely to change in the next few months, Matejka writes. Money supply, which tends to lead PMIs by two to three quarters, is accelerating, while the European Central Bank is starting a new round of quantitative easing. Additionally, the weak economy, trade tensions and Brexit uncertainty are helping build the case for a fiscal stimulus.

There are still some risks though, particularly Brexit, with a no-deal outcome likely to weigh on European stocks generally. Matejka prefers to see the glass half full: not only is the U.K. crashing out of the European Union not in his base-case scenario, he also wouldn’t ignore the possibility of a deal being signed by the Oct. 31 deadline, which would be very bullish for U.K. stocks, but would also support the case for Euro-area equities.

To contact the editors responsible for this story: Blaise Robinson at brobinson58@bloomberg.net, Paul Jarvis