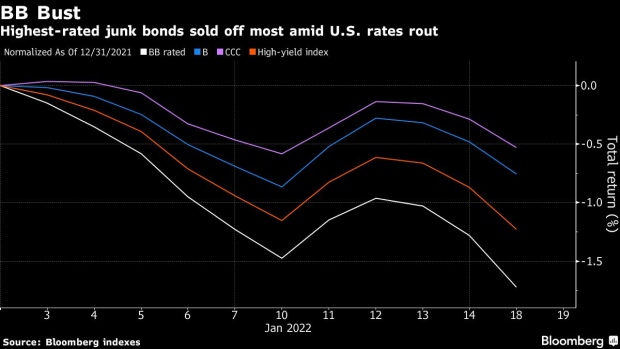 (Bloomberg) -- Rapidly rising yields have dragged junk bonds down by the most since the pandemic started, led by the highest-rated bonds, which face record losses.

The Bloomberg U.S. Corporate High Yield Bond Index is down 1.23% year-to-date, headed for its biggest monthly tumble since March 2020 and worst January performance in six years. About half that index is rated BB -- the rating tier with most duration, or sensitivity to rising rates -- and those bonds have fallen by 1.7%.

At this rate, BB debt will have the worst January on record, according to index data compiled by Bloomberg that goes back to 1983. The overall junk index is meanwhile having its rockiest first month since 2016.

To be sure, strong U.S. economic growth, robust company balance sheets and a lack of significant nearby debt maturities are seen supporting junk bonds. Default rates hit a record low 0.5% last year and are expected to rise only slightly to 1% this year, according to Fitch Ratings.

“From a spread perspective we are pretty positive, it’s really about the Fed and how aggressive are they going to get over the horizon, and any potential policy missteps,” said Matt Kennedy, a high-yield portfolio manager at Angel Oak Capital Advisors.

The worst-rated junk bonds are doing best, with CCC debt down 0.53%. That rating tier includes energy producers which have been supported by the rally in oil prices.

Chinese high-yield dollar bonds surged on Wednesday, with a number of developers’ notes on pace for record daily gains, after a report said that China is drafting eased rules for pre-sale funds in escrow accounts.