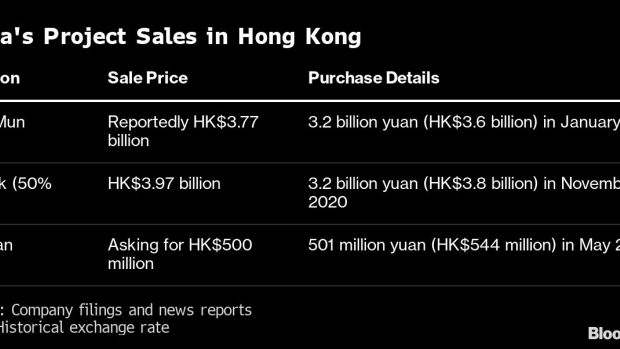 (Bloomberg) -- In less than two years, Chinese property developer Kaisa Group Holdings Ltd. has gone from being an up-and-coming player in Hong Kong’s property market to a desperate seller.

As it strives to raise money to alleviate a liquidity crunch during China’s property deleveraging campaign, Kaisa has been reversing its expansion in the city with a series of asset sales in the past month.

It’s a dramatic volte face after founder Kwok Ying Shing and his family made headlines earlier this year with acquisitions ranging from land sites to luxury apartments and even a popular local newspaper. Now Kaisa, which became the first Chinese developer to default on offshore dollar debt in 2015, is trying to stave off a repeat that could come as soon as next week if bondholders don’t accept its plea for a lifeline.

Kaisa bought four residential sites in the city since January 2020, marking its official entry in the world’s most expensive home market. But only one of the projects managed to begin selling units to home buyers. The remaining three plots are still in the early phase of development, and Kaisa is giving them up before it can reap the profits from selling them to individuals as apartments.

The need for asset sales will become even more pressing if creditors don’t accept Kaisa’s request to swap its $400 million of notes maturing Dec. 7 for new ones due 18 months later. If the offer -- which expires at 4 p.m. London time on Thursday -- fails to win support, the struggling firm has said it may not be able to repay bonds and could consider a debt restructuring.

The sales “could only partly help but can’t solve the liquidity issue,” according to Raymond Cheng, head of China and Hong Kong research at CGS-CIMB Securities. Net proceeds from the Hong Kong asset disposals will be dwarfed by the $2.8 billion in dollar bonds that Kaisa has coming due next year.

Kaisa isn’t the only mainland developer that’s offloading assets in Hong Kong during the cash squeeze. China Evergrande Group and China Aoyuan Group Ltd. are among firms seeking to raise funds that way, dashing their prospects of making inroads in the city’s lucrative property industry.

Declining market share in Hong Kong is “an inevitable outcome” of the crisis at Chinese property companies, said Cheng. While some firms including China Overseas Land & Investment Ltd. and China Vanke Co. may still buy in the territory, others don’t have the financial resources, he said.

Kwok co-founded Kaisa Group with his two brothers in 1999. The company started selling its first residential project the next year before gaining popularity by redeveloping distressed properties in Shenzhen. One of its most iconic ventures was to turn an abandoned site into a residential-commercial integrated development called Shenzhen Kaisa Center in 2006. Now the family owns almost 40% of the developer as well as smaller stakes in Kaisa Health Group Holdings Ltd., Kaisa Prosperity Holdings Ltd. and Kaisa Capital Investment Holdings Ltd. -- units that focus on dental care, property-management services and construction.

Kaisa’s woes have wiped out much of the Kwoks’ fortune. With shares slumping in all of the group’s trading units, the family’s wealth has plunged 85% to about $200 million from $1.3 billion in January, according to the Bloomberg Billionaires Index. The developer’s Hong Kong-listed stock has tumbled 73% this year, one of the largest declines among its peers.

Still, the clan retains some valuable assets. Kwok and two of his daughters each own luxury apartments in Hong Kong’s Bel-Air area that are worth more than $29 million combined, according to data compiled by Bloomberg. The daughters bought their homes only in March, and one of them, Kwok Hiu Ting, also purchased a 28% stake in Hong Kong media outlet Sing Tao News Corp. earlier this year.

Separately, Kwok and his two brothers own Fulbright Financial Group, a brokerage in Hong Kong, according to a regulatory filing in 2013.

Aside from assets in Hong Kong, Kaisa is planning to put 18 projects in its home city of Shenzhen up for sale with a total value of $12.8 billion, Bloomberg reported last month.

It’s unclear whether the family has tapped its shrinking personal wealth to help with the company’s crisis. By contrast, founders of several other troubled Chinese developers have been dipping into their fortunes to aid their firms. Evergrande’s billionaire owner, Hui Ka Yan, recently raised cash by cutting his stake for the first time since the company was listed, after regulators urged him to shore up its finances.

Read how China property moguls are using their fortunes for rescues

For Kaisa, the immediate challenge will be getting creditors to accept its debt swap offer, and there are reports that many bondholders are unwilling to support it. The firm is China’s third-largest borrower of dollar bonds among property firms, with some $11.6 billion outstanding. That means a default could spur contagion risk just as global investors return to such notes.

The exchange offer is unlikely to get approval from bondholders because a debt restructuring may still eventuate, said Kenny Ng, strategist at Everbright Sun Hung Kai Co.

“Net proceeds of the asset sales aren’t significant compared to Kaisa’s outstanding bond payments,” Ng said. “There are still many bond deadlines for Kaisa and its peers to meet in the next year.”