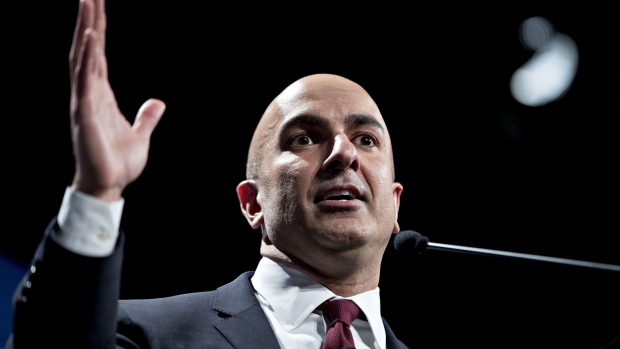 Neel Kashkari, president and chief executive officer of the Federal Reserve Bank of Minneapolis, speaks during a presentation at the National Association for Business Economics economic policy conference in Washington, D.C., U.S., on Monday, March 6, 2017. Kashkari spoke about the impact of banking regulation, and his "Minneapolis Plan" to end the too-big-to-fail problem among financial institutions. , Bloomberg

“If the economy entered a steep downturn, we could always stop what we’re doing. We could always -- if we needed to -- reverse what we’re doing, if we thought that inflation was headed back down very, very quickly,” Kashkari said Wednesday during a town hall event in Rhinelander, Wisconsin.

“For me, the bar for such a change is very high because we have not yet seen much evidence that the underlying inflation -- the services inflation, the wage inflation, the labor market -- that that is yet softening,” he said.

The Fed has raised its benchmark interest rate by three percentage points this year in a bid to bring down the highest inflation in four decades. Investors currently expect Fed officials to increase the rate by another three-quarters of a percentage point for a fourth straight meeting when they next gather Nov. 1-2 to decide policy, according to futures contracts.

“I think we’re quite a ways away from anything like that,” Kashkari said, referring to the idea of a policy pivot. “I think a much more likely scenario is we will raise to some level north of 4% -- maybe 4.5 -- and then pause and sit there for an extended period of time while the tightening we’ve already done works its way through the economy.”

A monthly Labor Department report on employment and wages published Oct. 7 showed the unemployment rate dropped to 3.5% in September, suggesting the Fed’s interest-rate increases so far have not had much impact on the labor market.

Another monthly Labor Department report on consumer prices, due out Thursday, is expected to show so-called core inflation, which excludes volatile food and energy prices, accelerated in the 12 months through September.

While he emphasized the Fed’s commitment to curbing inflation, the Minneapolis Fed chief also offered an explanation for why the central bank was not moving even faster than it already is.

“If we just went up 2% or 3% or 4% in one shot, it may well be that that’s too much, and that we end up overdoing it needlessly,” Kashkari said. “So, by moving and looking at the data and seeing how the economy is responding, it allows us to try to measure the dosage somewhat, while still moving aggressively.”