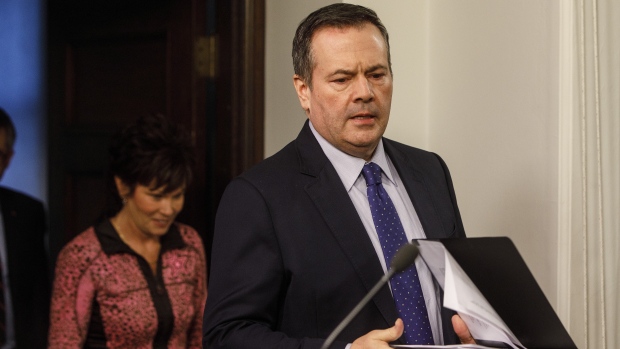 EDMONTON -- Premier Jason Kenney says Alberta has been among the world leaders in staunching the spread of the COVID-19 pandemic, but at a staggering financial cost the province cannot afford to repeat should there be a second wave.

Kenney says the key to prevention will be ramped-up testing, border screening and a focus on protecting the highest risk groups -- seniors and those with underlying conditions.

"The most important strategy as we move forward is building a wall of defence around the most vulnerable," Kenney told the house Wednesday as he updated his government's response to the pandemic.

He noted the province has made changes to provide personal protective equipment and financial aid to care facilities, and brought in new rules that prevent staff from working in more than one continuing care centre.

Kenney said Alberta's success against the virus began when officials heeded early warning signs of the pandemic late in 2019 and began  stocking up on supplies that have allowed it to be a leader in per- capita testing.

There are 45 people in hospital with the virus, five in intensive care, and 139 people have died.

Kenney pushed back on critics who said the province overreacted and was too strict with measures to enforce social distancing and putting limits on business.

"For some members of the public who say we should simply emulate (the more liberal lockdown measures of Sweden), they must be prepared to defend a death rate 12 times higher per capita than what we've experienced in Alberta."

Kenney said the impact on businesses, jobs and spending has been profound and this year's budget is projected to soar to $20 billion.

He said the numbers show the average age of COVID-19 deaths in Alberta is 83 and that the risk of dying for those under the age of 65 is much lower.

"What we are learning is that younger people, while not completely immune, have a rate of mortality related to COVID that is no higher than their general mortality rate for other illnesses," said Kenney.

Given that rate, he said, future measures to stop COVID-19 must seek to protect those at risk while avoiding wholesale shutdowns of the economy.

"We cannot continue indefinitely to impair the social and economic as well as the mental health and physiological health of the broader population for potentially a year through measures (to combat) an influenza that does not generally threaten life apart from the most elderly, the immune-compromised and those with co-morbidities."

NDP Opposition Leader Rachel Notley agreed a second wave must be mitigated, but said Kenney's government must do better.

She said the province took too long to act on Opposition demands for more safeguards in care centres and failed to protect workers exposed to unsafe work conditions at meat plants.

She urged Kenney to provide income protection for low-income workers who will otherwise, when faced between self-isolating and feeding their families, go to work even if they are showing symptoms of infection.

"This is not just a human rights thing and income support and an anti-poverty thing," Notley told the house.

"It is also a public health thing, because people, particularly minimum-wage workers, cannot afford to lose two weeks (pay) every time they get a cold," said Notley.

Also Wednesday, auditor general Doug Wylie said his office will review government spending on the pandemic with a focus on the outcomes of the added spending.