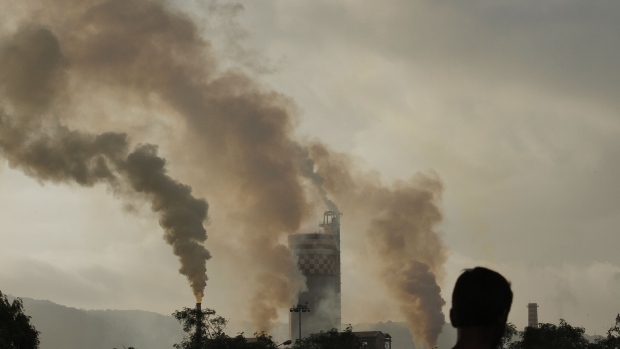 While the union is working on energy-efficiency measures and curbs for emissions for autos and industry, its leaders express frustration that other nations aren’t following their example with more aggressive action. , Ewa Krukowska

(Bloomberg) -- The lawmaker overseeing reform of the European Union’s carbon market is working on measures to prevent manipulation as the price of polluting surges to a record amid stricter climate policies.

The soaring costs of emissions, exacerbated by an unprecedented energy crunch, prompted some EU members, including Poland and Spain, to demand actions to curb the role of speculative investors. Benchmark permits erased part of earlier gains, rising 1.4% to 81.68 euros per metric ton at 4:03 p.m. on the ICE Endex exchange in Amsterdam. A record of 90.75 euros was set last month.

“We need to do something, and we need to stop manipulation,” Peter Liese, the lead lawmaker steering the reform package through the European Parliament, said Friday. “But, on the other hand, we shouldn’t propose something that is not solving the problem and may have counterproductive effects.”

The carbon market is the bloc’s key tool for meeting a tougher climate goal for 2030 and, eventually, the Green Deal target of climate neutrality by 2050. The market, started in 2005, imposes shrinking caps on emissions from almost 12,000 installations owned by manufacturers, power producers and airlines. It is set to expand into shipping.

A set of amendments Liese proposed Friday didn’t include any provisions to curb pollution costs, though he said those measures were on his agenda going forward.

“It’s not so easy, but I’m working on it,” said Liese, a German Christian Democrat. “I’m talking to the banking sectors and independent experts, and we will definitely come with ideas.”

He dismissed as ineffective such measures as limiting market access only to companies covered by the EU trading system, a proposal advocated by Poland. Such a move, along with proposals to invalidate allowances after some time, wouldn’t solve the problem of manipulation and would hurt companies instead, said Liese, a member of the European People’s Party, the biggest political group in the EU Parliament.

While increasing pollution costs are needed to stimulate a shift to cleaner technologies, the fast pace of gains in the EU carbon market has triggered concerns by energy-intensive manufacturers about the transition to net-zero emissions.

“The main problem is our dependency on fossil fuels,” he said. “That’s why the Green Deal is the solution.”