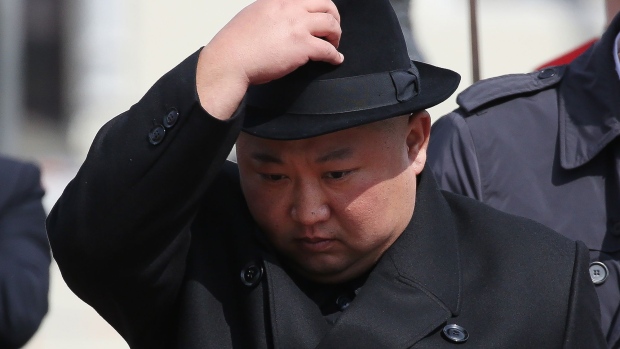 Kim Jong Un, North Korea's leader, prepares for his departure to North Korea at the railway station in Vladivostok, Russia, on Friday, April 26, 2019. Kim said the summit will be a “starting point for productive talks on cooperation,” Vesti TV reported him as saying in an interview. Photographer: Andrey Rudakov/Bloomberg , Bloomberg

Kim was in critical condition after undergoing cardiovascular surgery last week and the Trump administration wasn’t sure of his current health, said U.S. officials, who asked not to be identified.

One of the officials said the White House was told that Kim took a turn for the worse after the procedure, while CNN earlier cited a U.S. official with direct knowledge saying the 36-year-old leader may be in “grave danger.” The White House declined to comment.

Meanwhile, South Korean President Moon Jae-in’s office said that Kim was conducting “normal activities” in a rural part of the country assisted by close aides and no special movements were detected.

Moon spokesman Kang Min-seok said earlier there was nothing to confirm on the speculation over Kim’s health.

North Korea’s state-run news broadcast at 6:30 p.m. local time made no mention of Kim, and the official Korean Central News Agency also didn’t provide an update on his condition.

Kim Min-ki, head of the intelligence committee in South Korea’s parliament, told Yonhap that he believes that there’s no unusual signs regarding Kim’s health after he was briefed by the country’s spy agency.

The news around Kim’s health spurred the benchmark Kospi gauge to extend losses to as much as 3 per cent while the won slid as much as 1.7 per cent against the dollar. The Kospi closed 1 per cent lower.

The health of Kim, overweight and a heavy smoker, is one of North Korea’s most closely guarded secrets, typically only known by a handful of people in the inner circle of leadership.

While North Korea had scaled down major events as it battles the coronavirus pandemic, speculation about Kim had been growing since his unprecedented absence from April 15 celebrations for the birthday of his grandfather and state founder Kim Il Sung, one of the biggest days on the country’s calendar.

Even the most well-informed North Korea experts find it hard to tell what’s happening in the secretive state. The Daily NK, a Seoul-based website that gathers information from informants inside the isolated nation, separately reported that Kim underwent a “cardiovascular surgical procedure” and was now mostly recovered.

“I saw some reports, but I don’t know what these sources are,” Chinese foreign ministry spokesman Geng Shuang told reporters in Beijing Tuesday afternoon.

Any leadership crisis in North Korea could potentially have serious ramifications for regional stability, as well as for talks with the U.S. over the country’s nuclear arsenal.

Kim, who took power in 2011 following his father’s 17-year reign, developed the capability to deliver a nuclear warhead to any part of the U.S. before engaging in direct talks with President Donald Trump over his arsenal and sanctions imposed on the state.

“When Kim Jong Un came to power, his path to leadership had been carefully cultivated by his father’s guidance and maneuvering,” said Mintaro Oba, a former U.S. diplomat who was specialized in Korean Peninsula issues. “Now, there is no clear transition plan and no clear future leader.”

Kim has been shown in state media in recent months appearing at military drills and riding a white horse on the country’s revered Mt. Paektu, where state propaganda says his grandfather used as a guerrilla base to fight Japanese colonial occupiers. North Korea’s state media reported on April 11 that Kim attended a Politburo meeting of the ruling Workers’ Party.

The next day it said he inspected a military unit, but didn’t reveal the date of that visit.

The South Korean Unification Ministry said Friday it was “inappropriate” to speculate about the reasons for Kim’s absence. Kim has made 17 public appearances this year that were mentioned in state media -- at a pace of a little more than one a week -- the ministry said. That’s slightly down from 84 public appearances last year.

They are thought to have three children, but there is no official mention of their offspring. Dennis Rodman, the offbeat basketball great who visited Kim in North Korea, said in 2013 he held the leader’s baby girl in his arms, a daughter named Ju Ae.

While there’s been little time for him to groom a successor, Kim raised the status of his younger sister Kim Yo Jong as a key player in the secretive state.

She was thrust into the global spotlight when she served as envoy to the 2018 Winter Olympics in Pyeongchang, South Korea, and became the first member of the immediate ruling family to visit Seoul.