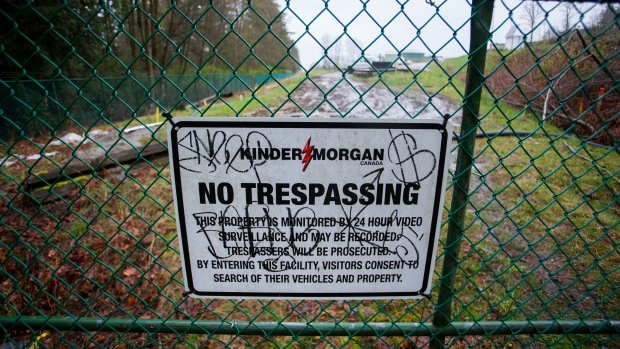 A "No Trespassing" sign is displayed on a fence outside of the Kinder Morgan Inc. facility in Burnaby, British Columbia, Canada, on Wednesday, April 11, 2018. , Ben Nelms/Bloomberg

CALGARY - Kinder Morgan Canada Ltd. (KML.TO) says it is continuing to evaluate its strategic options and hopes to announce its next steps in coming weeks.

The company was spun off from its American parent in mid-2017 to raise money to build the Trans Mountain pipeline expansion but that purpose no longer exists after it sold the existing pipeline and its expansion project to the federal government for $4.5 billion last summer.

Chief financial officer Dax Sanders says in a news release the options being evaluated include continuing as a standalone enterprise, a disposition by sale and a strategic combination with another company.

He says the process, which analysts had expected to be complete by now, is taking longer than anticipated due to the “complexity” of the situation.

The company reported net income of $21.3 million on revenue of $102 million in the three months ended March 30, compared with $44.4 million on $88.6 million revenue in the same period a year earlier.