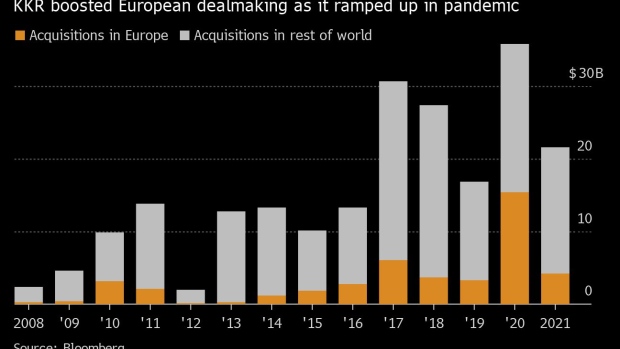 When the pandemic hit, shortly after Philipp Freise and Mattia Caprioli took over new roles in Europe, the buyout house started deploying as much capital as possible while most rivals held back. More than a third of the total was spent in Europe, and KKR started working on a new fund dedicated to the region just a year after closing the last one.

The breakneck pace of deals took its toll. KKR is now echoing the gentler tone adopted by investment banks like Goldman Sachs Group Inc. after employees balked at the work-till-you-drop culture. The biggest challenge to high performance in the buyout industry is “constant exhaustion,” Freise, 47, said in an interview.

“As new-generation leaders, our job is to really temper,” said the German dealmaker, who’s co-head of KKR’s European private equity business with Caprioli. “It is almost like conducting an orchestra where the whole thing has gone into ‘Ride of the Valkyries’ -- we have to slow down a little bit to protect the human element from crashing.”

The unusually open tone by leaders in the cutthroat buyout industry comes as workplace cultures come under increasing scrutiny and employers seek ways to retain a younger generation of workers. The pandemic served up a brutal cocktail of more deals done over marathon video calls by employees isolated at home. The priority now for Freise and Caprioli is to offer time to recover and make room for a more thoughtful investing approach.

They gave junior staff every Friday off in November and December last year, encouraging them to spend time thinking and reading. The duo have also handed responsibility to their rising stars for emerging trends like medical technology and the future of work.

The issue at buyout firms, like investment banks, is that employees worked around the clock as the pandemic threw up a plethora of deal opportunities. As Covid-19 spread around the globe, KKR decided to not repeat its mistake from the financial crisis, when it stayed largely on the sidelines.

It became a pivotal moment for KKR in Europe, where it previously hadn’t deployed as much money as in other parts of the world. KKR has announced $19.6 billion of deals in the region since the start of the pandemic, from listed company buyouts to minority investments, according to data compiled by Bloomberg. It’s also snapped up assets from other private equity firms, and sometimes swooped in before rivals had a chance to bid.

“If anything, we missed some opportunities that if we had more capital available we would have done,” said Caprioli, a 47-year-old Italian who previously worked in mergers and acquisitions at Goldman.

Later in the year, KKR teamed up with Cinven and Providence Equity Partners to take Masmovil Ibercom SA private in a 3 billion-euro ($3.6 billion) deal and agreed to invest in French hospital chain Elsan alongside Ardian. Market dislocations helped KKR buy some assets for 20% to 30% less than it would pay in a heated auction process, Freise said. The firm reached an agreement this May to buy environmental consultancy ERM Group Inc. for $2.7 billion including debt.

Caprioli sees more deals on the horizon, with a focus on health care, sustainability, tech and the U.K. Competition for targets is rising, thanks to the record amounts of capital flowing into private equity funds and buoyant debt markets.

Success may require a new approach. Caprioli said he sees this moment as an opportunity to review how KKR recruits, motivates and retain talent. Earlier this year, it hired a former concert pianist as an operating executive in London to work with tech companies in its portfolio.

“We need people who go deep in their thinking process,” he said. “Those type of profiles, do you get them out of university, or can you get someone who is streetwise? It’s an interesting challenge.”

Freise, who previously helped found the failed Venturepark startup incubator in Berlin, couldn’t build financial models when he joined KKR nearly two decades ago as one of its earliest London employees.

“A high-performance team these days is very different from 10 years ago,” he said. “We have to be unconventional to ensure diversity of thought.”