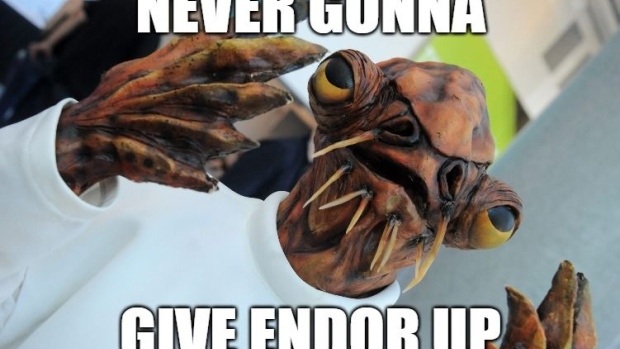 (Bloomberg Opinion) -- Attention spans have never been shorter, yet there’s never been more content to read, watch and scan — judiciously, of course. That creates the perfect incubation conditions for “memes” — cultural symbols that spread through society by replication, sharing and imitation.

Internet memes can start with almost anything — a line from a movie, a silly hat, a fly on someone’s head or even a poor translation like “all your base are belong to us.” Early examples stretch back to the 1990s and include gems like “ROFLcopter” and the hamster dance, both of which I’ve personally seen at least 100 billion times.

Sometimes, the lines between meme and reality blur. In 2013, the “doge” meme — featuring a dog’s internal monologue —was baked into a cryptocurrency. Today, the latest blurring is shaking the Conundrums universe to its core: Nine memes have collided with each other, and it’s your job to figure out who they are and how to link them up. Once you do that, with another logical leap or two, you should be able to identify something to send us as this week’s answer.

If you manage this impossible mission -- or if you even make partial progress -- please let us know at skpuzzles@bloomberg.net before midnight New York time on Thursday, October 22. (If you get stuck, there’ll be hints announced on Twitter and in Bloomberg Opinion Today.) To be counted in the solver list, please include your name with your answer.

Programming note: Next week, Conundrums will run on Sunday, October 25. If you have opinions about the optimal release day/time for the column, please let us know at skpuzzles@bloomberg.net.

In a Conundrum clearly unrelated to anything going on in the real world, we examined a theoretical vice-presidential debate featuring a fly that landed on the head of one of the candidates. The challenge was to figure out what happened after the moderator blurted out, “There’s a fly on your head!!” without the candidates being able to tell whom the moderator was addressing.

For the sake of argument, let’s say one candidate is male and the other is female. Now imagine the fly has chosen the male’s head for a pit stop.

At the start, neither candidate knows whether they have a fly on their head, but the first time they look at each other they gain some information: She sees a fly on his head, and is partially reassured. While it’s possible there is also a fly on her head (the moderator didn’t say “there’s a fly on one of your heads”), she knows for a fact that there is a fly on her opponent. He doesn’t see a fly on her head, confirming that there must be one on his.

That triggers a rule of the puzzle: He blushes in embarrassment. On the next round, she can see him blushing, and this gives her more information: Her opponent wouldn’t have blushed if he didn’t think he was the only debater with a fly problem, so she knows she’s fly-free.

In the second setting we described, the candidates try to bluff their way through the whole fly episode by blushing only if they are sure of two things:

In that event, he doesn’t blush in the first round because he knows that she knows there’s some chance there’s a fly on her head, too. When he doesn’t blush, she isn’t certain whether he knows there’s a fly on his head. So the bluff works. In the next round, he knows she isn’t sure whether he’s sure about the fly, so again he doesn’t have to blush; she is still uncertain, and they make it through the whole debate without either one acknowledging the fly’s presence. (But did she see it? You know she did!)

This is an example of what’s called a “common knowledge” problem in logic. In an even more famous version, there’s a fly on each candidate’s head, and the moderator makes the same announcement. Can you figure out what happens then?(2)

Lazar Ilic solved first, followed by Ross Rheingans-Yoo, Laurent Granger, Filbert Cua, Dahlia Malkhi, Jeremy Hurwitz, Michael Thaler, Zoz and Ali Haberman. Elizabeth Sibert submitted a probabilistic model accounting for the possibility that the fly might move back and forth between the candidates during the debate.(3)

Build a selfie booth for dogs; swim in Scrooge McDuck’s money. Bizarre Star Wars dance-offs; Muppet Bohemian Rhapsody; and a delicious geometry project. A new book about the Rubik’s cube. Musical telescope observations; room-temperature superconductivity; political jokes in Pinky and The Brain. Plus inquiring minds want to know: how much wood could a woodchuck actually chuck?

(1) In that case, since both candidates can see a fly at the outset, it seems like the moderator's announcement hasn't given them any new information. But in fact it has!

(2) Thanks again to Shengwu Li for collaborating on the Conundrum!

Scott Duke Kominers is the MBA Class of 1960 Associate Professor of Business Administration at Harvard Business School, and a faculty affiliate of the Harvard Department of Economics. Previously, he was a junior fellow at the Harvard Society of Fellows and the inaugural research scholar at the Becker Friedman Institute for Research in Economics at the University of Chicago.