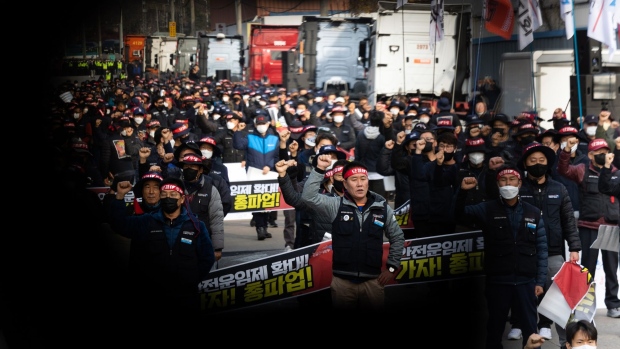 Truck drivers and members of the Korean Confederation of Trade Unions during a protest at the Uiwang Inland Container Depot on Nov. 24. , Photographer: SeongJoon Cho/Bloomberg

A majority of union members who voted agreed to return to work, according to an emailed statement Friday. That came after the government on Thursday ordered striking truckers in the steel and petrochemical industries back to work.

The truckers’ strike has added to worries after South Korea’s exports fell the most in two-and-a-half years in November, dragged down by an economic slowdown in China and cooling demand for semiconductors. The nation is emerging as one of the most visible hot spots for growing labor discontent, as workers around the world demand safer conditions and better wages in the face of soaring food and commodities prices.

The public appears to be backing the government’s hard-line approach to the strike. President Yoon Suk Yeol’s support rate rose two percentage points to 33% in a weekly tracking poll by Gallup Korea, to reach its highest level since mid-September. Separate polling has shown the public wants truckers to reach a deal and get back to work.

Since Nov. 24, the truckers have been protesting a lack of progress on wage demands after months of negotiations following a previous work stoppage in June. The union attempted to expand and extend a system that calculates minimum wages based on operating costs, including fuel prices.

The union demanded the government legislate a three-year extension of the current wage system that is set to expire at the end of 2022. While the government had previously agreed to the extension, Transport Minister Won Hee-ryong said Friday the agreement is no longer valid given the huge economic damage the strike has caused.