Investors see Bitcoin more as a store of value than a currency: Jason Del Vicario

European Central Bank President Christine Lagarde said her institution could launch a digital currency around the middle of this decade if her fellow policy makers give the project the green light this summer.

“We need to make sure that we do it right - we owe it to the Europeans,” Lagarde said in a Bloomberg TV interview on Wednesday. “The whole process - let’s be realistic about it -- will in my view take another four years, maybe a little more.”

The ECB is about to release an analysis of the 8,000 responses it received as part of a public consultation process on the potential launch of a central bank digital currency. That will be sent to the European Parliament and then the ECB’s decision-making Governing Council will decide in the middle of this year whether to move forward with its practical experimentation.

The second decision -- whether to roll out a digital currency -- will be made six months to a year after that, she said.

“It’s a technical endeavor as well as a fundamental change,” Lagarde said. “We need to make sure that we’re not going to break any system, but to enhance the system.” 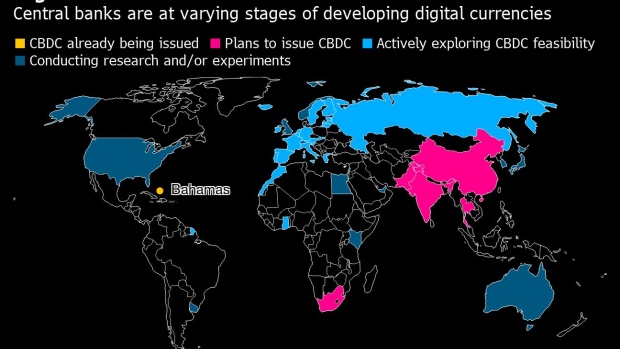 Cash will also continue to be available, she added.

Lagarde also said she will be closely watching the recent roll out of a digital currency by the Bahamas, called the Sand Dollar.