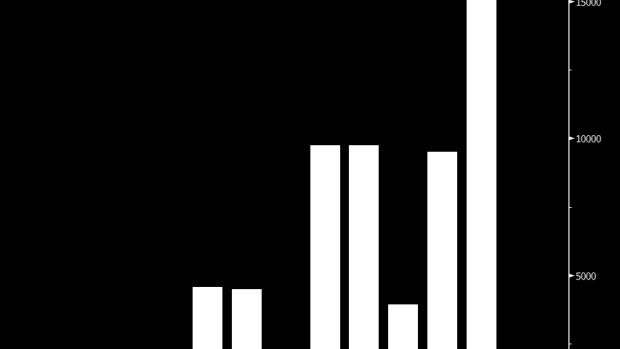 Looking for a place to ride out recent market volatility? Equity investors have a suggestion.

With markets gyrating and a widely watched fear gauge spiking to its highest in seven months in August, billions of dollars have poured into strategies that hedge against wild swings. Exchange-traded funds focused on low-volatility stocks have lured a record US$17.8 billion in 2019, almost double the haul of any full year, data compiled by Bloomberg show.

Safer areas of the market have benefited as trade tensions between the U.S. and China intensify, with a recent breakdown in negotiations between the two parties spurring fears of a protracted global slowdown. Investors are consequently cautious, but with the Federal Reserve signaling easier monetary policy, many are seeking yield in more protected equity strategies.

“People are looking for predictability and they’re getting it with these companies,” said Steven DeSanctis, a U.S. stock strategist for Jefferies. These funds offer good yield plays, he said, adding that “in a low interest-rate environment, they can hold up and perform well.”

While topping fund inflows is a rare occurrence for so-called smart-beta ETFs -- which focus on stocks with a particular set of characteristics -- two low-volatility products are among the year’s 25 most popular ETFs. Strategies tracking the S&P 500 Index and emerging markets have historically been more popular.

Low-volatility stocks turned out to be a good bet in August as stocks tumbled about 3 per cent on three separate occasions, but also rallied more than 1 per cent seven times. While the S&P 500 ended the month down 1.8 per cent, less volatile equities advanced, delivering returns for funds run by the likes of BlackRock Inc. and Invesco Ltd.

But investors may be surprised by exactly what they own if they look beneath the hood of their low-volatility funds.

The US$34 billion iShares Edge MSCI Min Vol USA ETF, known as USMV, has taken in more than half of all cash that’s gone into that category of funds this year, yet its largest allocation -- 16 per cent -- is to technology stocks that are typically more associated with growth strategies, data compiled by Bloomberg show.

That’s because USMV is designed to stay within 5 per cent of a broad MSCI Inc. index’s weightings. A rival product from Invesco, known as SPLV, instead buys the 100 least volatile companies across the S&P 500, skewing its portfolio toward utilities and financials. Both USMV and SPLV gained in August, but the latter returned an additional 76 basis points.

However, both funds proved popular as a net US$19 billion exited equity ETFs in August. USMV saw a cash infusion on all but three days, with a record monthly inflow of US$2.2 billion, while investors also added about US$256 million to Invesco’s product, which recorded its 10th-straight month of inflows.

“You’re being exposed to equities, but you’re not getting those volatile swings,” said Shawn Cruz, manager of trader strategy at TD Ameritrade. “There definitely is a preference from investors that maybe they’re getting tired of seeing these swings in their holdings every day. They don’t want to see their portfolio swing 2 per cent to 3 per cent based off of some headline.”