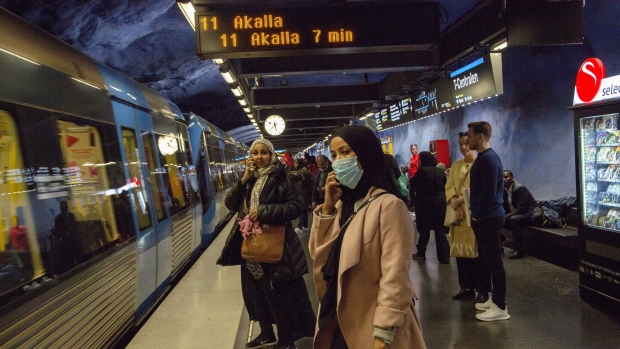 Sweden’s “light-touch approach” to curtailing the spread of COVID-19 has produced only limited economic benefits, according to research that compared spending patterns in the Scandinavian country and in Denmark, where far more restrictive policies were adopted.

Unlike elsewhere in Europe, Sweden did not go into lockdown, keeping shops, schools and restaurants open and relying on voluntary social distancing instead. While the strategy has resulted in a much higher mortality rate, researchers at the University of Copenhagen found that consumer spending in Sweden fell only 4 percentage points less than in neighboring Denmark -- 25% compared to 29%.

According to Adam Sheridan, one of the authors of the study, the relatively small difference is likely due to consumers in Sweden independently deciding to restrict spending out of health concerns.

The findings suggest that consumer spending “will drop even absent a government intervention,” Sheridan said.

The results, published on Monday by the Proceedings of the National Academy of Sciences, may help inform the global debate on how to balance health and economic concerns in the coronavirus era.

“If you accept that the difference in mortality in Sweden and Denmark is caused by the different policy choices, then our findings suggest that you actually don’t lose that much extra spending for each extra life you save,” Sheridan said.

Sweden has suffered a higher mortality rate than its neighbors, with the number of deaths attributable to Covid-19 stands at 5,747 in Sweden and 616 in Denmark, according to latest official data.

The European Union is forecasting similar drops in gross domestic product for Sweden and, Denmark this year.