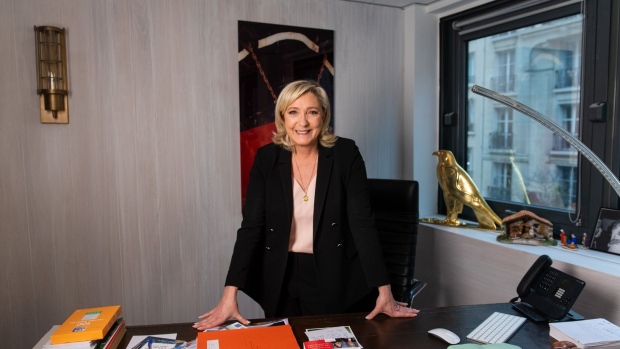 (Bloomberg) -- French nationalist leader Marine Le Pen lashed out at her far-right rival Eric Zemmour on Tuesday, saying his anti-migration campaign is too extreme even for her.

“He brings nothing more except maybe brutality,” Le Pen said of the former media pundit in an interview in Paris with Bloomberg TV. “You have to be firm, clear, warn of what you are going to do, but you don’t need to add brutality to it. We don’t need to attack people.”

The 53-year-old candidate also said she wouldn’t want some members of Zemmour’s entourage on her team, labeling them “extremely radical.”

After coming third in 2012 and losing to Emmanuel Macron in 2017 following a divisive and tumultuous campaign, Le Pen’s last shot at the Elysee is likely to be this April. Victory became a more difficult prospect when Zemmour and Valerie Pecresse of the right-wing Republican party emerged as contenders late last year.

As a result, Le Pen appears to have made the calculation that her best bet is moving even more toward the center.

It’s a process she started in 2011, when she took over the party from her father Jean-Marie, who founded it as a nationalist, anti-immigration, anti-Semitic movement.

Le Pen banned racist, xenophobic and anti-Semitic language among members, though she hasn’t always moved to oust offenders, and she expelled her father from the party in 2015.

Though this strategy helped Le Pen become more mainstream, it wasn’t enough in 2017, when she lost to Macron by a margin of 33 percentage points.

Since then, she’s changed the party name to National Rally, ditched a pledge to exit the Eurozone and softened her anti-European Union rhetoric. She now wants to alter things like free-trade agreements and migration law from within, encouraged by polls showing that even though voters are critical of the way the bloc operates, Frexit isn’t a popular solution.

She has also said France must repay its debt and adopted a more mainstream approach to the economy. And she’s shut down those who publicly insult homosexuals.

While pollsters initially predicted a replay of the 2017 duel in this year’s vote, the emergence of Zemmour and Pecresse upset this forecast.

Zemmour, who has been condemned three times for inciting racial hatred, has eaten into Le Pen’s support base and lured some top officials from her party, even though his campaign has slipped in surveys in recent weeks. Pecresse, meanwhile, has surged. She and Le Pen are neck-and-neck behind Macron. The top two vote-getters advance to a runoff in the French presidential election system.

In the interview, Le Pen said she’s struggling to obtain a bank loan, which might force her to run a very low-cost campaign. It’s sign she is still considered toxic by some businesses, despite the attempts to cast herself as a credible stateswoman.

Le Pen described Macron and Pecresse as “globalists” and said they are “exactly the same” when it comes to promoting free trade and reducing public services, and that Zemmour shared most of Macron’s ideas on the economy and free market. She slammed the polemicist’s attitude toward women, whom he referred to as a “goal” and “spoils” for “any gifted man who longs to climb up social ranks” in his book published last year, France Hasn’t Said its Last Word.

Moving to the center is fraught with risks — Le Pen could lose her anti-elite credentials, a central element to her appeal to her base, to Zemmour’s radicalism.

She was careful to leave the door open to his supporters, saying “the principle is to try to unite.” She will need their votes if she makes it to the runoff, or if he doesn’t obtain the support of 500 elected officials, a legal requirement to run for president in France.

If Zemmour stays in the race until the end, “the only thing he might achieve is defeating national ideas,” Le Pen said. “Maybe it’s the ego. Sometimes when men do irrational things, it’s about pride.”