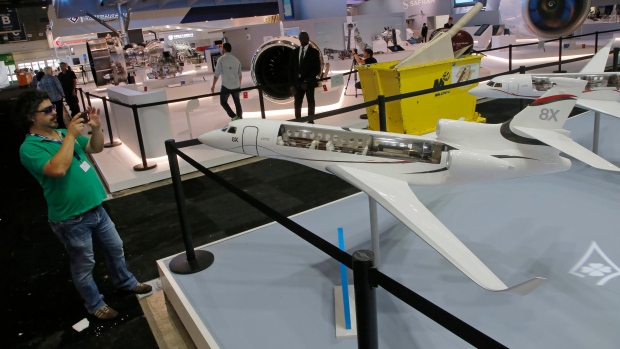 A man take a photo of a Falcon 8x model at Paris Air Show, on the eve of its opening, in Le Bourget, east of Paris, France, Sunday, June 18, 2017. , The Canadian Press

OTTAWA -- Aerospace giant Boeing appears to have gotten the cold shoulder from the Trudeau government in Paris.

Three cabinet ministers are in the French capital this week to promote Canada's aerospace sector and meet with various companies at the prestigious Paris Air Show.

Those meetings include discussions with fighter jet makers such as Lockheed Martin, which is hoping its F-35 stealth fighter will replace Canada's aging CF-18s.

But Transport Minister Marc Garneau and Industry Minister Navdeep Bains say there are no plans to meet with Boeing, despite previous talks to buy 18 interim Super Hornet fighter jets from the company.

Ministers say the plan to buy Super Hornets from Boeing has been put on hold, as the government considers all options for buying interim jets.