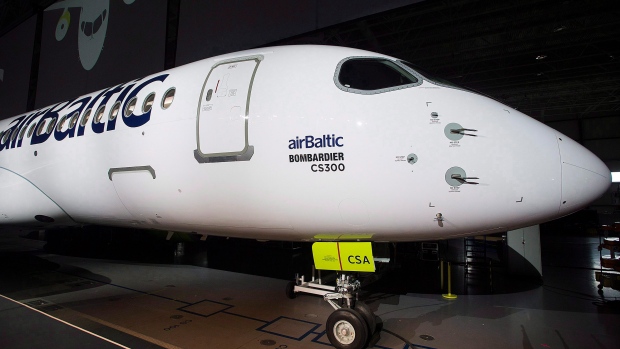 A Bombardier CS300 is shown during a ceremony to mark the first delivery of the commercial jetliner to Air Baltic in Mirabel, Que., Monday, November 28, 2016. , The Canadian Press

Bombardier Inc.’s (BBDb.TO) marquee CSeries jet, which hasn’t won a major new contract in more than a year, got a boost from interest at Qatar Airways and Air Baltic Corp. and from a new jet-leasing venture between the planemaker’s largest outside shareholder and General Electric Co.

The single-aisle model could be suited to an Indian operation that Qatar Air has won permission to establish, the Persian Gulf carrier’s chief executive officer, Akbar Al Baker, said Monday at the Paris Air Show. AirBaltic said the first jets from an order for 20 CS300s have outperformed fuel-burn targets and confirmed it is progressing with an evaluation of the smaller CS100 variant.

“We’ve had several conversations with Akbar and he is watching the program,” Fred Cromer, president of Bombardier’s commercial aircraft unit, said in an interview at the expo. “His interest level increased when he was able to see the aircraft for the first time in Paris a couple of years ago.”

The deal valued is reportedly valued at US$235 million.

“We are delighted that Philippine Airlines is growing its fleet with more Q400 aircraft, and are confident that the airline will benefit from the aircraft’s outstanding economics and performance,” said said Fred Cromer, President, Bombardier Commercial Aircraft in a statement.

Qatar Air said in March that it aims to set up a short-haul airline in India with a fleet of 100 narrow-body planes as its renews a push to tap one of the world’s fastest-growing travel markets. That project remains on track, with the Doha-based company gaining the right to establish the unit when it is ready, Al Baker said.

The airline has come close to buying the CSeries before, though it shelved those plans at the 2011 Paris Air Show.

The move involving the Bombardier investor “may be be a positive” for the C Series, Cromer said, while declining to speculate further about the implications.

Bombardier is confident of winning more C Series orders this year. The company has delivered 14 of the aircraft to date. Certification to take off and land at London City airport -- which has a short runway unable to handle most jetliners -- has piqued the interest of carriers, while Riga, Latvia-based AirBaltic has reported strong performance data.

“I have CEOs coming up to me saying they’re hearing the aircraft is doing extremely well,” Cromer said. “The number and intensity of the conversations is increasing.” There was similar interest among airline executives at the International Air Transport Association annual meeting in Mexico this month, he said.

AirBaltic has improved fuel burn 21 per cent from the five CSeries planes it has received, compared with the Boeing Co. 737-300s that the model is replacing, the airline’s CEO, Martin Gauss, said at the air show. That’s compared with the promised 19 percent boost. Passenger feedback has focused on lower noise levels, a brighter interior and bigger spaces for stowing baggage, he said.

The carrier needs 14 planes to replace a fleet of Bombardier Q400 turboprops and is evaluating the CS100 against Embraer SA’s E195-E2 jet, which is set to enter service in the first half of 2018. An order decision could come later this year with deliveries starting in 2021, Gauss said in an interview.

Bombardier is also hopeful that existing customers will convert options they have for the C Series into firm orders, Cromer said. Lufthansa holds 30 such positions, while Korean Air Lines Co. President Walter Cho is talking about exercising 20 options beyond the 10 jets on order even before taking the first aircraft later this year.