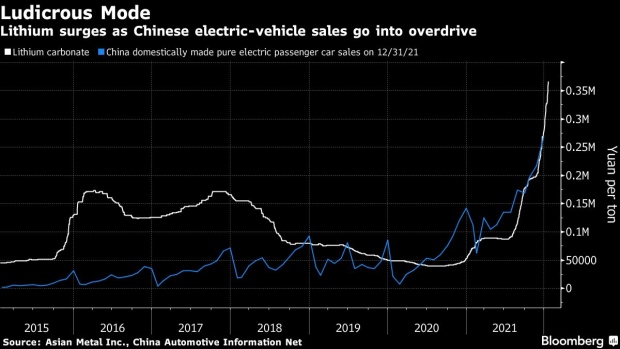 (Bloomberg) -- Lithium prices are continuing their breakneck ascent in China, with surging electric-vehicle sales underpinning a fivefold gain over the past year.

Chinese lithium carbonate prices tracked by Asian Metal Inc. rose to a fresh record on Monday, as data showed a 35% month-on-month jump in electric-vehicle registrations in December. Nearly 400,000 EVs were registered during the month, according to the China Automotive Technology and Research Center. Tesla Inc. supplied about 18% of the total.

The sales figures offer the latest evidence that the electric-vehicle revolution is now arriving in full force, fueling sharp gains in the shares of carmakers and mining equities alike. Ganfeng Lithium Co., which signed a long-term supply deal with Tesla in November, said its profits for 2021 will be up as much as 437%, fueled by the “fast development” of the EV industry.

But with lithium prices blowing past previous records, there’s a growing risk that raw-material inflation could soon create headwinds for the burgeoning industry. BloombergNEF predicts a 2% rise in battery pack prices this year, potentially pushing out the point at which electric vehicles will reach cost parity with conventional cars to 2026, two years later than its earlier forecast.

And despite the bumper profits on offer, many analysts see the lithium market moving into deeper deficits in the years ahead as producers struggle to bring new projects online. Last week, Serbia blocked plans for Europe’s biggest lithium mine, in a dramatic response to local opposition to the project that’s set to pile more pressure on future supply.