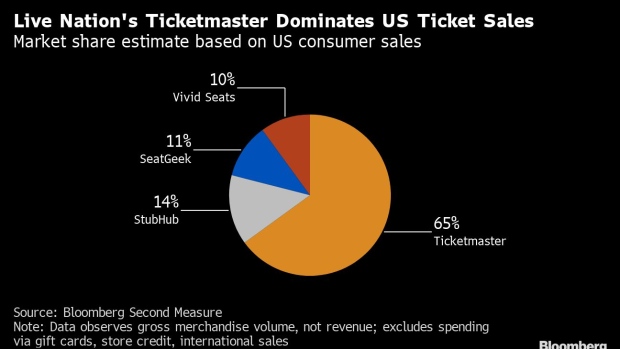 (Bloomberg) -- The head Live Nation Entertainment Inc. will tell Congress on Tuesday that the concert promoter learned “valuable lessons” from the debacle that forced its Ticketmaster unit to cancel public sales for a Taylor Swift tour when its site crashed amid massive demand.

Joe Berchtold, the president and chief financial officer of Live Nation, will appear before the Senate Judiciary Committee to answer questions about the incident in a hearing focused on competition in the $12 billion live music entertainment market.

“In hindsight there are several things we could have done better – including staggering the sales over a longer period of time,” Berchtold said in written testimony prepared for the hearing.

Berchtold will testify that the problems with the Swift ticket sale in November resulted from unprecedented demand and a cyberattack that overwhelmed the company’s servers. He plans to urge Congress to take further steps to thwart automated ticketing “bots” that overwhelm sales.

“We need help passing real reforms to stop this arms race,” he said in the testimony.

Ticketmaster has perennially fielded complaints from fans and politicians about the price and availability of concert tickets, but protests exploded in November after the Swift concert debacle.

Meanwhile, the US Justice Department is investigating Live Nation and Ticketmaster over antitrust concerns, even as the company remains subject to court-ordered monitoring in the wake of previous complaints.

The Senate hearing marks the third time lawmakers have publicly lambasted the ticketing giant for allegedly anticompetitive conduct. The first instance was in 1994, when Seattle grunge band Pearl Jam appeared before Congress to blast the ticket seller. The second was in 2009, when Ticketmaster and Live Nation proposed a merger.

The deal, which was completed in 2010, united the world’s largest concert promoter with the largest ticketing site. It received close scrutiny from regulators and required the companies to enter into a settlement agreement designed to maintain competition in the industry.

Justice Department antitrust lawyers found in 2019 that the company violated the terms of the settlement allowing the merger and imposed new conditions, including an ongoing monitor.

The 2010 settlement that allowed Ticketmaster and Live Nation to merge has been sharply criticized. Critics, including some members of Congress, have urged the Justice Department to use its newest probe, opened last year before the Swift ticket meltdown, to break up the company.

Live Nation has invested more than $1 billion to improve the Ticketmaster platform since the acquisition, including technology designed to deter bots and eliminate fraud, according to Berchtold’s written testimony.

The ticketing market today is more competitive than ever as rivals like SeatGeek and EventBrite Inc. have shrunk Ticketmaster’s market share from a high of more than 80% in 2009, he said in the prepared remarks.

The company has urged Congress to enact stiffer penalties against scalpers who use computer bots to buy up large quantities of tickets and require transparency measures such as “all-in” pricing to make clear the face value of a ticket along with a listing of any fees.

Artists and promoters select which venues will host shows, but the venue itself selects what ticketing platform is used, often by entering an exclusive deal that lasts several years. Live Nation itself owns about 100 US venues that all use its ticketing service. About half of the top 200 US concert venues also have Ticketmaster as their exclusive ticketing provider.

Ticketmaster earned 65% of US sales among major ticketing platforms in 2022, according to Bloomberg Second Measure, a transaction-data analytics service. The next largest company, ticket exchange and resale platform StubHub Inc., earned only 14% of US sales.

--With assistance from Lucas Shaw, Ashley Carman and Anna Edgerton.