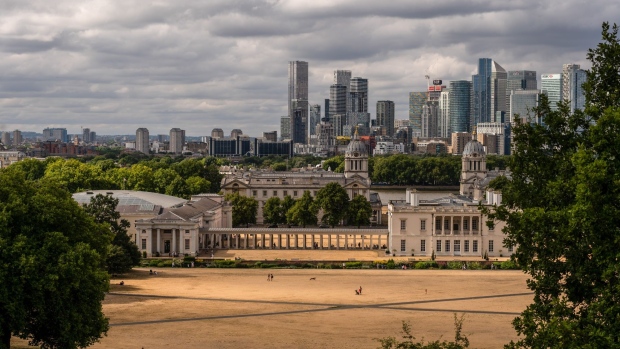 (Bloomberg) -- The lawns crossing Britain’s Kew Gardens, home to the world’s biggest collection of living plants, have turned yellow. Amid one of the hottest and driest summers on record, gardeners at the southwest London tourist attraction are carefully choosing how and when to irrigate thousands of species of plants and trees that draw in more than a million visitors a year. Over on woody Hampstead Heath, a park in the north of the city, staff have fenced off a number of trees to protect them against the risk of fire.

Across London — and most of England — the unprecedented heat this summer has pushed plant life, infrastructure and residents to the edge. Green leaves are falling ahead of autumn. Dead grass crunches as you walk across the park. At times there’s been a desert-like feeling in the air. High temperatures have also sparked fires near London. Train operators have triggered warnings about buckling railway lines. Gas pipelines have cut output due to high temperatures.

The source of the city's main river, the Thames, is now five miles further downstream than usual, according to the Rivers Trust, an environmental charity.

“The grass color is a kind of good barometer of how much it has been raining recently,” said Barnaby Dobson, a research associate on the  Community Water Management for a Liveable London project at Imperial College London.

It’s been weeks since there has been significant rainfall in London. Running low on water is becoming an odd concern for a city and country where drizzly weather used to be as much of an emblem as Big Ben. It’s also another indicator that the UK’s climate is changing after thermometers exceeded 40 degrees Celsius (104 Fahrenheit) for the first time in July.

Outside the capital, water restrictions are being put into effect. Southern Water will enforce the first hosepipe ban in southeast England on Friday in Hampshire and the Isle of Wight. This means if residents want to irrigate their garden, they’ll need to use conservative methods such as watering cans or potentially face a fine of up to £1,000. South East Water Ltd. will impose a similar ban on customers in Kent and Sussex from Aug. 12.

The glaring scenes across London raise the question of whether the capital is next in line to declare a drought. That decision will be up to Thames Water Utilities Ltd., which is responsible for London’s water supply. The company said it’s ready to implement water usage restrictions if the unusually long dry streak continues. It currently has a “statutory drought plan” in place, detailing a plethora of actions it would take as the situation worsens.

“We know the water we have stored in our reservoirs will continue to reduce, so if we do not receive around or above average rainfall in the coming months this will increase pressure on our resources and may indeed result in the need for more water saving measures including restrictions,” a Thames Water spokesperson said in an e-mail.

Still, a hosepipe ban in London is unlikely in the immediate future. While most would agree that London is in a climate drought — just look at the yellow grass — it would take critically low reservoir levels for a so-called water-resources drought. This is the kind that Thames Water cares about.

For now, the capital’s large reservoirs, which can supply the city for hundreds of days, are currently at “very comfortable levels,” according to Dobson. Reservoirs in London were 91% full at the end of June, before the heat wave, which was already below average for the time of year, but still far off any prospect for a ban.

Water rationing is a measure of last resort that would only come after awareness campaigns and hosepipe bans. Even though it’s on the table, water companies are usually wary of triggering a consumer backlash. Utilities have other options such as tapping emergency aquifers — rock formations that hold groundwater — or old reservoirs that are no longer in use but still have some water in them. They could also convince the UK’s Environment Agency to let them take more water out of the river to avoid any kind of rationing — although that risks resource depletion and other environmental concerns, Dobson said.

Christine Colvin, advocacy and engagement director at The Rivers Trust, said the UK uses more water per capita than any other country in Europe. “Part of our current issue with low water levels leading to measures like hosepipe bans is that we still think of this as a wet country, treating water as an infinite resource,” she said in a statement.

Rainfall is lagging, with England recording the driest July in 87 years amid searing and deadly heat. There may have been 844 excess deaths in England and Wales during the heat wave last month, according to a preliminary analysis. The Met Office expects temperatures to rise again next week, with some areas in the south reaching 30 degrees Celsius.

While by definition a drought is caused by a period of low rainfall, its impact on people, the environment, agriculture, and businesses varies. Some droughts are short and intense— for example, it could just be one hot, dry summer. Others are long and take time to develop over multiple seasons.

The Environment Agency would be responsible for declaring a nationwide drought. Still, Dobson said that since water companies became privatized in the late 1980s, droughts are usually declared on an area by area basis. There have been severe droughts in the UK before — most recently over 2018-2019 — but none have been more dramatic than the one in 1976. Then, 16 months of unusually dry weather meant it did not rain enough for reservoirs to capture and store supplies. It got so bad that people had to queue up for water in the street.

Dobson said that while this summer is unlikely to be as bad, “we could get to 1976 levels in a different way — if we had a dry (but not exceptionally dry) autumn and winter, then we would also be in a very bad place next summer.”

Across Europe this year drought has dried rivers and decimated crops. The situation forced Italy to declare a national emergency in July. The scorching heat is a stark reminder of the unfolding climate crisis. Heat waves are becoming more frequent and intense, and extreme temperatures are set to become more common.

“Unfortunately, climate models and forecasts indicate such extreme weather may well become the norm in the next 50 years,” said Richard Barley, director of gardens at Royal Botanic Gardens, Kew.

This means visitors to Kew’s mile-wide stretch of gardens may need to get used to seeing dried lawns, which are left to rely on only rainwater to survive.

“Our priority right now is to safeguard plants within the living collections that are high conservation value or of historic importance,” he said. “Botanic gardens worldwide are already having to adapt their landscape management strategies to these new conditions. Kew is no exception.”