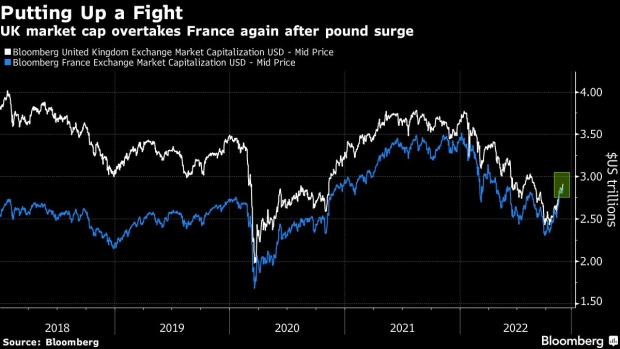 A member of the public stands outside the London Stock Exchange (LSE) in London, U.K., on Monday, March 23, 2020. The U.K. stepped in to shore up the country's rail operators after Prime Minister Boris Johnson warned Britons they face "tougher measures" to fight the coronavirus outbreak, including a potential lockdown if they continue to ignore calls to stop social gatherings. Photographer: Jason Alden/Bloomberg , Bloomberg

(Bloomberg) -- A rally in the pound has lifted the UK stock market back above its French equivalent as the biggest in Europe in dollar terms, after it lost the title just 10 days ago.

The combined market capitalization of primary listings in the UK, excluding ETFs and ADRs, reached $2.915 trillion on Wednesday, about $63 billion higher than its French equivalent. That’s due to a 2.5% gain in sterling in the past seven trading sessions against the dollar, compared to a rise of only 0.7% for the euro.

“Even though today we’re probably in a better place than we were a month ago with the mini budget, I still think that the growth headwinds for the UK market are really difficult,” said Madison Faller, global strategist at JPMorgan Private Bank, in an interview. “From an equity market perspective it is not my favourite.”

After being the biggest stock market for decades, London’s preeminence over the rest of Europe has faded since the Brexit referendum, with Paris, the biggest challenger, overtaking the UK capital earlier this month.

French stock gains have slowed in the second half of November as luxury companies such as LVMH SE, which dominate the French market, have stalled amid mixed headlines about a reopening in China.

--With assistance from Ellie Harmsworth.