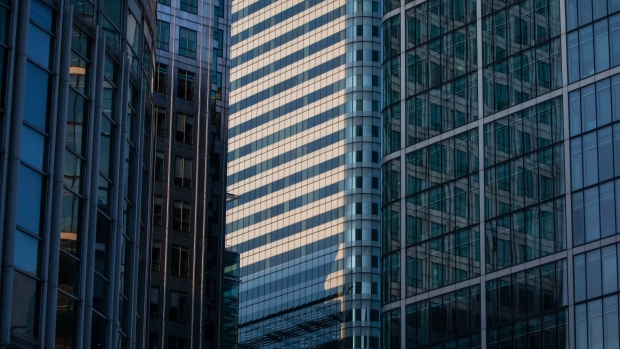 Skyscraper office buildings stand in the Canary Wharf business, financial and shopping district of London, U.K., on Monday, Sept. 14, 2020. Londoners are steadily increasing their use of public transport after schools reopened, freeing parents to go back to the workplace. Photographer: Simon Dawson/Bloomberg , Bloomberg

(Bloomberg) -- The U.K.’s financial watchdog said it planned to fine a London trader 100,000 pounds ($129,900) for market abuse after he “recklessly” failed to heed a colleague’s misgivings about his trading behavior.

Abbattista gave “false and misleading signals” about the level of demand for options tied to a number of British shares, the FCA said. In a period spanning just short of four months in 2017, he placed large orders only to trade the other way. The misconduct arose even as a senior colleague warned him about it.

“Abbattista closed his mind to those misgivings, which should have caused him to consider whether his actions were acceptable,” the FCA said.

It’s the first high-profile penalty by the regulator in a market abuse case since 2017, when it fined a former Bank of America Corp. bond trader 60,000 pounds for creating a misleading impression of supply and demand in the trading of Dutch state loans.

Abbattista didn’t respond to a message seeking comment. According to the FCA notice, he disputed the nature of his colleague’s comments.

He said his colleague didn’t think there was anything wrong with the trading, according the FCA notice. This colleague “appeared anxious (as he was prone to be)” and so Abbattista stopped using the technique “out of respect for his feelings.”

The trading was a legitimate way of testing “the true state of liquidity” in the market, Abbattista said. The FCA had no evidence that other traders were misled.

“The trading was not proving to be of any particular value,” and there was no point in continuing, Abbattista said in the FCA notice.