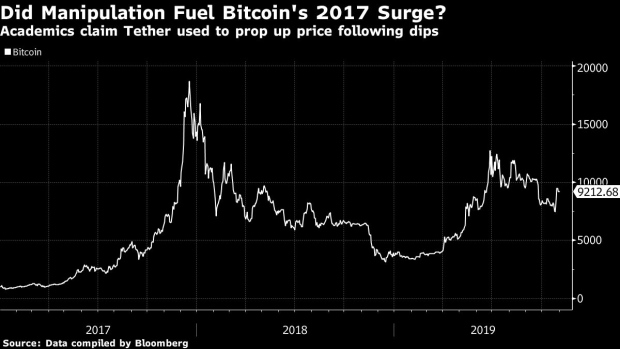 (Bloomberg) -- A Texas academic created a stir last year by alleging that Bitcoin’s astronomical surge in 2017 was probably triggered by manipulation. He’s now doubling down with a striking new claim: a single market whale was likely behind the misconduct, seemingly with the power to move prices at will.

One entity on the cryptocurrency exchange Bitfinex appears capable of sending the price of Bitcoin higher when it falls below certain thresholds, according to University of Texas Professor John Griffin and Ohio State University’s Amin Shams. Griffin and Shams, who have updated a paper they first published in 2018, say the transactions rely on Tether, a widely used digital token that is meant to hold its value at $1.

“Our results suggest instead of thousands of investors moving the price of Bitcoin, it’s just one large one,” Griffin said in an interview. “Years from now, people will be surprised to learn investors handed over billions to people they didn’t know and who faced little oversight.”

Tether rejected the claims, with General Counsel Stuart Hoegner arguing in a statement that the paper is “foundationally flawed” because it is based on an insufficient data set. The research was probably published to back a “parasitic lawsuit,” the general counsel added.

Bitfinex and Tether aren’t new to controversy. The exchange is owned and operated by the same executives who control Tether, and multiple traders have questioned a key assertion about the coins -- that each one is backed by one U.S. dollar. The tangled web has attracted scrutiny from the U.S. Justice Department and New York’s attorney general, who accused Bitfinex in an April lawsuit of trying to hide the loss of hundreds of millions in customer funds.

Griffin and Shams’s hypothesis that Bitcoin was manipulated is based partly on the theory that new Tethers are created without the dollars to back them and then used to buy Bitcoin, leading to rising prices. The authors examined Tether and Bitcoin transactions from March 1, 2017 to March 31, 2018, concluding that Bitcoin purchases on Bitfinex increased whenever Bitcoin’s value fell by certain increments. Griffin and Shams didn’t name the entity on Bitfinex that they think was responsible. They shared their updated research with Bloomberg News.

“This pattern is only present in periods following printing of Tether, driven by a single large account holder, and not observed by other exchanges,” they wrote in their new peer-reviewed paper, set to be published in a forthcoming Journal of Finance. “Simulations show that these patterns are highly unlikely to be due to chance. This one large player or entity either exhibited clairvoyant market timing or exerted an extremely large price impact on Bitcoin that is not observed in aggregate flows from other smaller traders.”

In his statement, Tether’s Hoegner was adamant that the allegations laid out in the paper have no merit.

“This is a transparent attempt to use the semblance of academia for a mercenary money grab,” Hoegner said. “Updates or not, the paper lacks academic rigor.”

He added that “macroeconomic experts and stakeholders in the cryptocurrency ecosystem understand that it is the global rise of digital currency that has driven the markets and demand for Tether.”

Both Bitfinex and Tether received subpoenas in 2017 from the U.S. Commodity Futures Trading Commission, Bloomberg reported at the time. The Justice Department has since opened a criminal investigation into whether Tether was being used to manipulate Bitcoin. Neither the CFTC nor federal U.S. prosecutors have accused Bitfinex or Tether of any wrongdoing.

In her lawsuit, New York Attorney General Letitia James said Tether and Bitfinex executives participated in a cover-up after about $850 million in client and corporate funds allegedly went missing. Bitfinex has said that James’ suit is riddled with erroneous assertions.

At the heart of James’ claims is Crypto Capital Corp., a Panamanian payment processing firm that Bitfinex used to allow some customers to deposit money on the exchange.

In late October, a Crypto Capital official was arrested as part of a Polish probe for allegedly laundering the proceeds of drug sales for an international crime group. The suspect, in according with Polish rules preventing the release of full names, was identified as Ivan M.L. by the county’s National Prosecutor’s Office. Polish media, including Radio RMF, said the suspect is Ivan Manuel Molina Lee, Crypto Capital’s president. Poland deported him to Greece.

Following the arrest, Tether’s Hoegner said in a statement to Bloomberg that “Bitfinex is the victim of a fraud and is and is making its position clear to the relevant authorities, including those in Poland and the United States.”

To contact the reporters on this story: Matthew Leising in Los Angeles at mleising@bloomberg.net;Matt Robinson in New York at mrobinson55@bloomberg.net

To contact the editors responsible for this story: Jesse Westbrook at jwestbrook1@bloomberg.net;Michael J. Moore at mmoore55@bloomberg.net