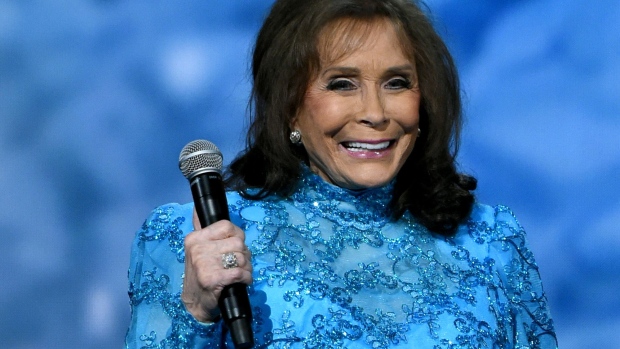 A statue of the legendary country artist Loretta Lynn is seen outside the Ryman Auditorium on October 20, 2020 in Nashville, Tennessee. , Photographer: Jason Kempin/Getty Images

(Bloomberg) -- Loretta Lynn, the coal miner’s daughter who became a country-music star by writing and singing songs about working-class women standing up for themselves, has died. She was 90.

She died on Tuesday at her home in Hurricane Mills, Tennessee, the Associated Press reported, citing a statement from her family.

Lynn began her music career after growing up in poverty, marrying in her teens and having four children in the next five years. Hit songs such as “Don’t Come Home A-Drinkin’ (With Lovin’ on Your Mind)” and “You Ain’t Woman Enough (to Take My Man)” drew from her experiences.

“She was breaking down barriers and walls for women left and right, and doing it right under everybody’s noses,” Jack White, the guitarist and singer for the White Stripes, said in a 2005 interview with CBS television.

Lynn reached No. 1 on Billboard magazine’s country singles chart 16 times, and another three dozen singles made the top 10. Her hits included recordings with Conway Twitty, who succeeded Ernest Tubb as her duet partner.

“Coal Miner’s Daughter” a No. 1 song from 1970, also was the title of her 1976 autobiography, a best-seller that was turned into a 1980 movie, starring Sissy Spacek as Lynn. Spacek’s performance earned an Academy Award.

A pillar of Lynn’s life story, as told in her book and the movie, was that she married at 13 and had four children by the time she was 18. The AP reported in 2012 that her birth certificate and marriage license showed instead she was born in 1932 and was 15 when she was married in January 1948.

After spending the 1990s in semi-retirement, she came back in 2004 with White’s help. “Van Lear Rose,” an album that he produced, arranged and played on, won two Grammy awards.

Lynn was born Loretta Webb on April 14, 1932, in Butcher Holler, Kentucky, near the town of Van Lear. She was the second of eight children of Melvin Webb, who worked as a farmer and coal miner, and his wife Clara. One of her siblings became the country singing star known as Crystal Gayle.

“We just had this one-room cabin they made from logs,” Lynn wrote in Coal Miner’s Daughter, co-written by George Vecsey. “The wind used to whistle in so bad, Mommy would paper the walls with pages from her Sears and Roebuck catalog and movie magazines.”

Lynn met her husband, Oliver Lynn Jr., also known by the nicknames Doo and Mooney, after he finished a World War II stint in the military and married him a month later. He was 21. While his drinking and infidelity strained the marriage, they stayed together for 48 years, until his death in 1996.

About a year after the wedding, the couple moved to Washington State. She was then pregnant with their first child, Betty Sue. They settled near the Canadian border, where Lynn’s husband became known as Mooney because he ran moonshine.

Lynn later had two sons, Jack and Ernest, and another daughter, Clara, known as Cissie. Jack died in a drowning accident in 1984 and Betty Sue died in 2013. She also gave birth to twin girls, Patsy and Peggy.

After learning to play a guitar that Mooney bought for her, Lynn became the singer in a band and then formed her own group.

Zero Records, a Vancouver, Canada-based label, signed her in 1960 after she performed at a talent show. “I’m a Honky Tonk Girl” was her first single, which she and Mooney drove cross-country to promote to radio stations. Several months later the song rose to No. 14 on Billboard’s country charts, leading to her first appearance at Nashville’s Grand Ole Opry.

While promoting the single in Nashville, Lynn met the Wilburn Brothers, a country vocal duo. On their advice, she and her family moved to the Nashville area. Teddy and Doyle Wilburn put her on their television program and road show and got her signed to Decca Records, a national label.

“Success,” Lynn’s first single for Decca, reached No. 6 on Billboard’s country charts in 1962. She had half a dozen top-10 singles before “Don’t Come Home A-Drinkin” became her first chart-topping hit in 1967.

By then, she had turned into a singer and songwriter with a feminist point of view, unique in country music at the time. The women she sang about fought back when their husbands strayed and fought off rivals for their men’s affections.

Lynn began working with Twitty in early 1970s, reaching the top 10 on the Billboard country charts a dozen times, including five No. 1 hits.

Migraine headaches, tumors, bleeding ulcers, exhaustion and blackouts slowed her, starting in the 1970s. While she recovered from her illnesses, the hits stopped coming as the 1980s ended.

“Still Country,” an album released in 2000, started her comeback. She then joined forces with White, and in 2004 they released “Van Lear Rose,” the first album for which she wrote every song.

She went to school in a one-room schoolhouse and received the equivalent of a fourth-grade education.