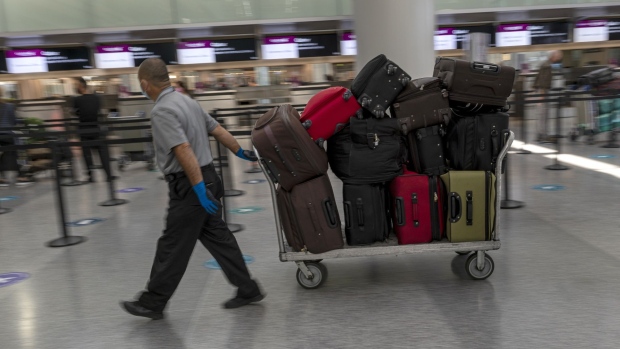 A baggage handler pulls a cart with luggage through the international terminal at San Francisco International Airport (SFO) in San Francisco, California, U.S., on Tuesday, May 11, 2021. A Chronicle analysis of Transportation Security Administration (TSA) data shows that SFO has been slow to approach pre-pandemic passenger traffic compared with the 50 airports that saw the most traffic at the beginning of 2020, reports the San Francisco Chronicle. , Bloomberg

(Bloomberg) -- The number of travelers reporting stranded luggage this summer jumped 30% from 2019, according to Spanish insurer Mapfre SA.

More bags are going missing as short-staffed airports and airlines struggle to keep up with luggage handling alongside surging travel demand.

Most stranded luggage ends up resurfacing, thus not triggering reimbursement, the insurer said.

Baggage Chaos So Bad Flyers Are Turning to Tracking Devices

Some holidaymakers have taken the matter into their own hands, slapping tracking devices onto their luggage to keep tabs on their belongings.

Many passengers have missed their transfer flights or were forced to leave their belongings behind. KLM, who handles some of the luggage at Amsterdam Schiphol, says a backlog of several thousand stranded bags has finally been whittled down to the hundreds. But the problem remains widespread across the region.

Even passengers with travel insurance may not be saved from summer airport misery. In the UK, four in 10 policies don’t protect against strikes, consumer group Which? reported in its annual review.