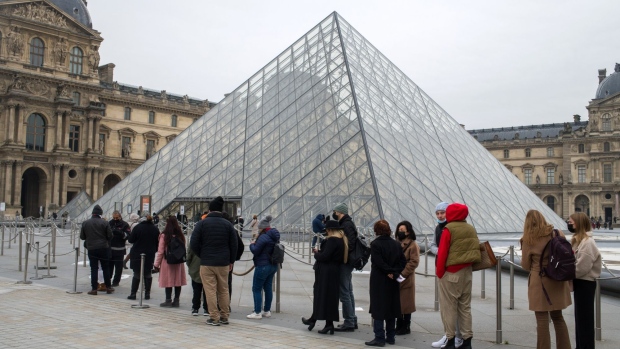 Visitors wait in line for access to the Louvre Museum in Paris, France, on Wednesday, Jan. 12, 2022. The pandemic in France has become a live political issue as authorities are struggling to contain the spread of the omicron variant and new infections hit a record. , Bloomberg

(Bloomberg) -- France’s crowded presidential campaign is getting more heated ahead of the April elections, and now even the Louvre, one of the country’s most recognizable symbols, is caught in the fray.

The institution on Saturday complained about a campaign video shot on its premises by nationalist leader Marine Le Pen without its permission.

The video, aired today and available on her party’s website, is entitled “The Louvre Declaration.” It shows Le Pen in front of the museum and walking around its glass pyramid, a reference to President Emmanuel Macron’s victory speech of 2017, which took place there.

The video was shot on Jan. 11 “without any authorization, in violation of the rules of law applicable to public domain and intellectual property,” a spokeswoman for the museum said by email in response to a Bloomberg query.

A spokeswoman for Le Pen said that no authorization is needed when a video isn’t shot for commercial purposes, according to the Louvre’s rules.

In the footage, Le Pen refers to the Louvre as an “architectural jewel” that’s the result of work of French kings such as Henry IV, a “mythical place” that stands as an example of “continuity” for the country. Then she starts blasting Macron’s “absurd handling of ceaseless crises,” and what she describes as his government’s many shortcomings.

Le Pen pledged to rule with a firm hand if elected, and to close the “parenthesis of a Macronism that’s been toxic for the country and that started here,” she said in the video.

Le Pen, who lost to Macron in 2017, and members of her team were informed by the museum directors while present on the Louvre site that filming required a prior agreement, according to the statement. The Louvre said it’s evaluating the “follow-up that could be given regarding the conditions of filming and distribution of this video.”

The museum’s objections to the video were first reported by Le Parisien on Saturday.