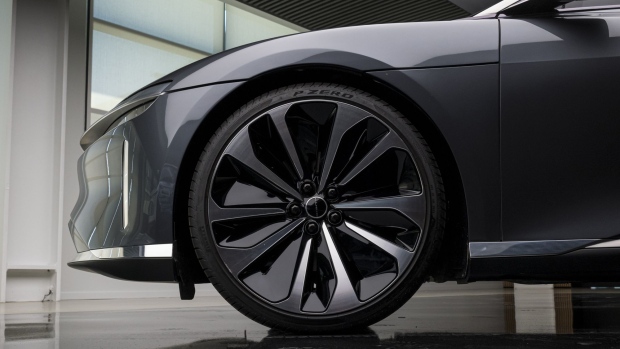 The front wheel of a Lucid Air prototype electric vehicle, manufactured by Lucid Motors Inc., is displayed at the company's headquarters in Newark, California, U.S., on Monday, Aug. 3, 2020. The final specs and design of the Lucid Air are due to be unveiled at an event in September and executives say customers can now expect delivery of the first batch of Airs in spring 2021. Photographer: David Paul Morris/Bloomberg , Bloomberg

(Bloomberg) -- Lucid Group Inc. intends to build an electric-vehicle factory in Saudi Arabia by 2025 or 2026 and is negotiating details with ministries in the kingdom.

“Now that we are successfully producing and selling cars in the U.S., our attention is turning to this factory here,” Lucid Chairman Andrew Liveris told Bloomberg Television on Wednesday at a mining conference in Riyadh. Specifics being worked out include ownership percentages for Lucid and partners on the project.

The maker of the $169,000 Air sedan has been in talks with Saudi Arabia’s sovereign wealth fund to build an EV plant potentially near the Red Sea city of Jeddah, people familiar with the matter said earlier this year. The $360 billion Public Investment Fund, which is already a shareholder in Lucid, will provide much of the money for the site at the King Abdullah Economic City, the people said, asking not be named because the discussions are private. The PIF and Lucid have also considered a possible site in Neom, a new city being developed in the northwest of Saudi Arabia.

Liveris, the former chairman and chief executive officer of Dow Chemical Co., said he’s taken delivery of one of Lucid’s cars in Florida. The Newark, California-based company’s goal for 2021 was to hand over 577 vehicles to customers -- 520 limited-release units of its debut Dream Edition, and the rest a lower-spec Grand Touring version.

“We’ll have a lot more to say to the market about the sorts of things we’re seeing in the supply chain,” Liveris said. “Yes, we’re experiencing supply chain issues.”

Liveris, 67, declined to comment on Lucid’s disclosure in December that it received a subpoena from the U.S. Securities and Exchange Commission. The investigation relates to Lucid’s combination with Churchill Capital Corp. IV -- the special purpose acquisition company that took the carmaker public in July -- and certain projections and statements, according to a filing.