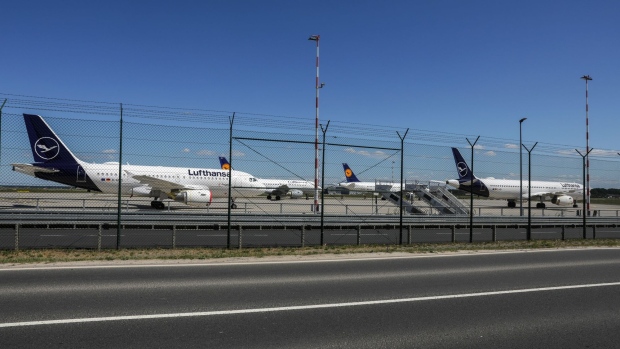 Grounded Deutsche Lufthansa AG passenger aircraft, manufactured by Airbus SE, sit on the tarmac at Frankfurt Airport, operated by Fraport AG, in Frankfurt, Germany, on Thursday, May 28, 2020. The German government bristled at the European Commission’s antitrust demands on its 9 billion-euro ($9.9 billion) bailout of Deutsche Lufthansa AG, in a sign of rising tensions over the stalled aid package. Photographer: Alex Kraus/Bloomberg , Bloomberg

Deutsche Lufthansa AG’s supervisory board backed a 9 billion-euro (US$10 billion) bailout by the German government, paving the way for the airline to receive the lifeline should investors approve it.

With cash reserves dwindling, the board voted in favor of the plan and called an extraordinary shareholder meeting for June 25. Its approval was unexpectedly delayed last week after members balked at European Union demands for slot disposals, a matter resolved in a deal sealed late Friday.

Investors now face a choice between a capital hike that will dilute their holdings, or tipping Europe’s biggest airline toward insolvency. Lufthansa’s management has told German officials and labor representatives that it will run out of cash on June 15, people familiar with the matter have said.

“We recommend that our shareholders follow this path, even if it requires them to make substantial contributions to stabilizing their company,” supervisory board Chairman Karl-Ludwig Kley said in a statement, adding that the final accord had been “a very difficult decision” involving “intensive discussion.”

Daniel Roeska, a transportation analyst at Sanford C. Bernstein, said in an email that it would be foolhardy for investors to vote down the package and that he expects them to fall into line behind the board.

With Lufthansa fighting for survival after the coronavirus crisis grounded global fleets, Germany offered a package of loans and equity investment. But when the EU demanded it give up slots, the supervisory board held off on accepting the lifeline, throwing the rescue into turmoil after weeks of talks.

Under the compromise deal reached Friday, Lufthansa will reduce its presence in Frankfurt and Munich by four aircraft apiece and surrender enough slots for 12 daily return flights. The EU intends the settlement to give new airlines a toehold to challenge the dominant German carrier at its fortress hubs.

Lufthansa’s bailout will set a precedent for airlines receiving direct state support to give up slots, the EU’s antitrust chief said in an interview Monday. Air France-KLM has won approval for a loan from the French government but has said it may seek further aid.

“If they come back for recapitalization, of course, they will be in the same category as Lufthansa has been,” Competition Commissioner Margrethe Vestager told Bloomberg TV.

The EU still has to approve other aspects of a deal that will make Germany the carrier’s biggest shareholder, thrusting the state back into the heart of company privatized with fanfare over two decades ago.

Like airlines the world over, Lufthansa has been struggling for survival after the COVID-19 pandemic punctured a decades-long aviation boom. The company expects its fleet to be 100 aircraft smaller post-crisis, implying the loss of 10,000 jobs.

“The expected slow market recovery in global air traffic makes an adjustment of our capacities unavoidable,” Chief Executive Officer Carsten Spohr said Monday. “Among other things, we want to discuss with our collective bargaining and social partners how the impact of this development can be softened in the most socially acceptable way possible.”

Lufthansa also said it will publish its interim report for first-quarter earnings on Wednesday, after delaying the statement originally due in late April.

--With assistance from Aoife White.