Lululemon Athletica Inc. fell by the most in more than six months on Thursday, after the yoga-wear maker’s fourth-quarter comparable sales forecast disappointed traders. The shares hit a record high Wednesday before the earnings report.

Analysts were broadly positive on the quarterly results and called the forecasts “conservative.” Estimates for sales and earnings were increased, and a number of firms also boosted their share-price targets. Bloomberg Intelligence’s Poonam Goyal wrote that “while management’s fourth-quarter EPS outlook is short of consensus at its midpoint, it may have upside if the pace seen over Thanksgiving weekend and limited markdowns carry through the quarter.”

Stifel’s Jim Duffy sought to clear up the fourth-quarter misconception for his clients, telling them that the consensus estimates ahead of Wednesday’s report “failed to properly account for lapping the 14th week and having six fewer selling days between Thanksgiving and Christmas.”

Shares fell as much as 6.4 per cent, the biggest intraday drop since May 29, paring the year-to-date advance to 80 per cent. 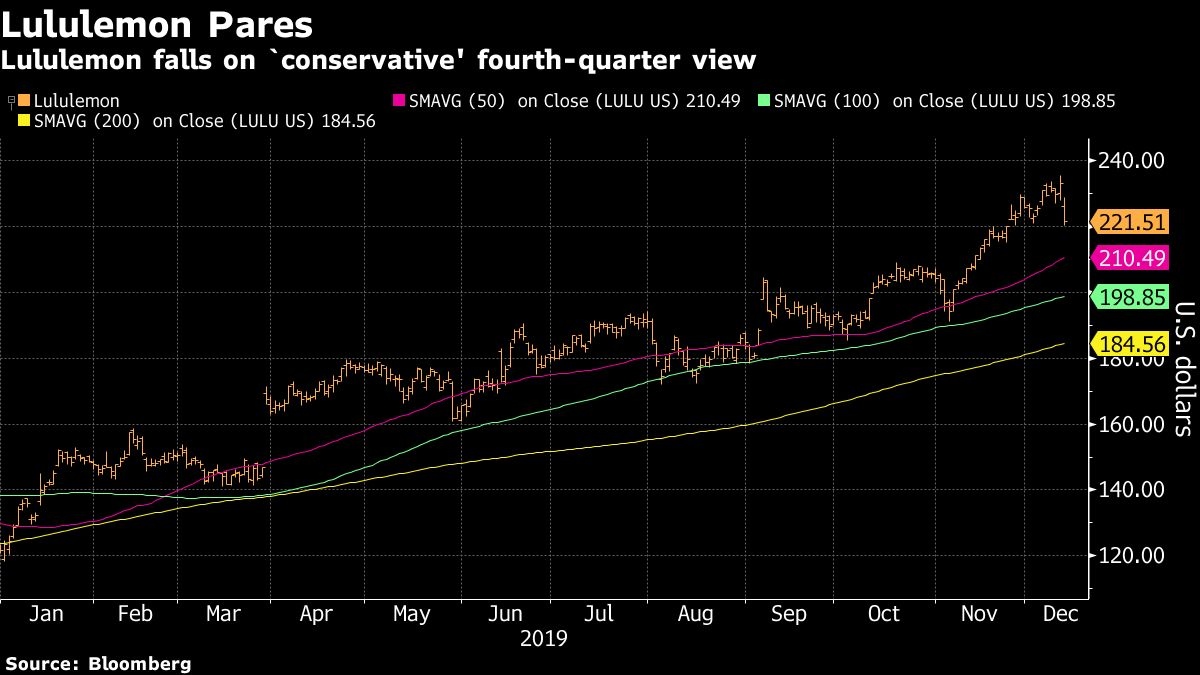 -The “impressive” 3Q results, “up and down the P&L,” are evidence that “momentum, driven by PEP (Product, Engagement, Process), is in full swing,” the analyst wrote
-Believes there is upside potential to Lulu’s raised, but still conservative, year forecast
-“Despite the 3Q19 beat and raise, exceptionally high expectations (likely above Street estimates) heading into the print and an ~15 per cent run-up in the stock since the 2Q19 print in September are resulting in downward pressure on the stock”
-Poser doesn’t believe the weakness is a “reflection of declining fundamentals,” and sees momentum continuing “for the foreseeable future”
-Rates positive, raises price target to US$260 from US$222

“Lululemon’s momentum, driven by an appetite for experience and mindfulness, with innovation in fabric, should extend into 4Q with the potential for same-store sales to gain more than the projected low-double-digit range,” analyst Poonam Goyal wrote in a note

She believes the company’s expectations for double-digit earnings gains through 2023, fueled by margin expansion and low-teens sales growth, “could prove conservative as personal care, experiential retailing and footwear spur sales.”

-There is “so much to like” with Lulu, Kernan wrote, noting that the company “continues to produce not only a sector best,multi-category product cycle, but also is forming some of the deepest connections with consumers in the entire global athletic, softlines industry through great product and experiences”
-He believes Lulu’s sales and margin trajectory indicate that the fourth-quarter forecasts appear “conservative”
-Management appears “increasingly confident” in China and Europe, “with emerging stores and brand activations across Tier II China as well as Paris”
-Rates buy, price target US$250

-“Some may mistakenly interpret” the fourth-quarter comparable sales guidance for low double-digit growth (constant currency) as a “sharp deceleration,” but Duffy noted that with the year ago’s 14th week and six fewer holiday shopping days this year, the forecast is an “endorsement of momentum”
-Remains bullish on the prospects for return on growth investments, and sees the stock as “deserving of a premium multiple”
-Rates buy, price target US$273

-Continues to see upside to comparable sales and earnings into the fourth quarter and next year, with “slight multiple expansion as the brand leverages its innovation and customer engagement focuses”
-“We would be buyers on any short-term weakness given Lulu’s open-ended growth story”
-Rates outperform, price target US$250

-“Strong profit reports have become the norm for Lulu and, as expected, Lulu posted another solid quarter with stellar comps and robust gross margin expansion”
-The U.S. consumer “may be running out of steam,” but Lululemon is “full steam ahead”
-Maintains buy rating, price target to US$255 from US$220

-“We are impressed with LULU’s ability to continue to “innovate and create newness with a solid new product pipeline, which is driving market share gains”
Growing men’s business, category expansion, and international growth should continue to drive “solid revenue growth over the next several years”
-Maintains her neutral rating, awaiting a better entry point; lifts price target to US$218 from US$182