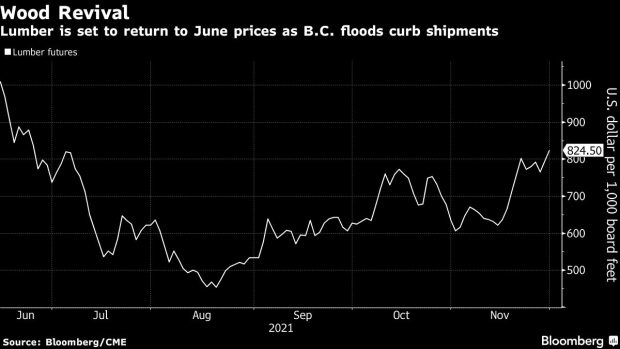 (Bloomberg) -- Lumber prices are poised to return to highs last seen in June after heavy rains and flooding in Canada’s westernmost province closed roads and caused the world’s biggest producer to curb shipments.

Lumber futures rose as much as 3.8% in Chicago on Tuesday to $824.50 per 1,000 board feet, on pace for the highest settlement price since June 24, according to data compiled by Bloomberg. Prices have climbed for the past two days, extending gains after West Fraser Timber Co. Ltd. said its western Canadian lumber weekly shipments plunged about 25% to 30% in the second half of the month following severe flooding in British Columbia.

“I would expect other B.C. mills to make similar decisions,” said Greg Kuta, founder of Westline Capital Strategies Inc., which specializes in lumber-trading strategies. “There is no point in producing more than you can ship right now, especially knowing lumber is at the bottom of the pecking order with rail car allocation.”

B.C., which produces about 14% of North America’s lumber and is Canada’s biggest exporter to the U.S., has been hit by a series of heavy rainstorms that have washed out roads and railway tracks. Canadian National Railway Co. said on Monday that it had to again stop operations near the Port of Vancouver due to ongoing water concern.

“Production cuts are proving larger-than-expected in lumber,” BMO Capital Markets analyst Mark Wilde said in a note to clients. “We had expected lumber to be relatively immune to disruption as most B.C. lumber flows east to Canada and U.S., not thru the bottlenecked Vancouver region. West Fraser’s release suggests that the transportation bottlenecks are hitting lumber operations.”

Rainfall warnings remain in effect for Vancouver, with Environment Canada forecasting a prolonged period of heavy rain through Wednesday. Total rainfall of 60 millimeters (2.4 inches) is expected over the region, and rising freezing levels and snow melt may contribute to increased runoff.