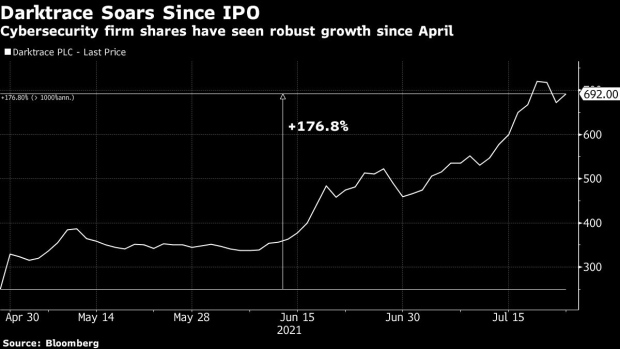 (Bloomberg) -- Even as Mike Lynch faces potential extradition to the U.S. on fraud charges those who have stayed loyal to the British tech entrepreneur are reaping the rewards of standing by their man.

Shares in Darktrace Plc, a cybersecurity company that Lynch helped found, took a hit as a London judge supported Lynch’s extradition to answer fraud charges. Lynch is accused of artificially inflating revenue at his previous company, Autonomy Corp, ahead of an $11 billion sale to Hewlett-Packard in 2011.

Yet Thursday’s decline barely dented the value of stock held by Lynch, his family and former Autonomy executives. They have seen the value of their holdings more than double to 1.2 billion pounds ($1.7 billion) since the stock began trading in April, and Thursday’s 6.4% drop wiped just 83 million pounds off that total.

Shares fell again early on Friday, by as much as 5%, before gaining to close up almost 3%.

For Lynch’s allies -- one of whom, communications executive Vanessa Colomar, accompanied him to court on Thursday and was by his side as he exited into a waiting London taxi -- the court ruling was a reminder that their personal fortunes remain yoked to how their former boss navigates an increasingly complex legal landscape.

The recent volatility in Darktrace shares, which were down as much as 17% in intraday trading on Thursday, contrasted with their inexorable rally since the company went public in April, and underscored warnings included in the company’s pre-IPO prospectus about the potential risks arising from Lynch’s legal battles.

After selling Autonomy, Lynch set up Invoke Capital Partners, where he was joined by many former Autonomy colleagues. Invoke went on to become a founding investor in Darktrace. In addition to being accused of inflating Autonomy’s sales, Lynch faces allegations by the U.S. of wire fraud and evading accounting controls by using Invoke and entities affiliated with Invoke to pay individuals who worked at Autonomy.

Darktrace said ahead of its IPO that there is a “low risk” it could face money laundering charges, as well as reputational damage, as a result of the charges Lynch faces.

The company declined to comment on the effect Lynch’s potential extradition could have on the shares. In an emailed statement, an Invoke spokesperson said the company is “confident that Dr. Lynch will be found to have done nothing wrong at Autonomy.”

The links between Darktrace and Autonomy are deep and have endured since the cybersecurity firm, which uses artificial intelligence to check for hacks and suspicious data leaks, was set up in 2013.

A year earlier, after completing the sale of Autonomy to HP, Lynch founded Invoke with a pledge to raise $1 billion for the next generation of tech companies. The plan was to lean on Lynch’s connections and the new company’s executive team included many former Autonomy managers.

Invoke injected 10,000 pounds as a founding investor in Darktrace, and later gave another 6.6 million pounds in loans, which have since been repaid. Darktrace became Invoke’s first big exit when it listed in London earlier this year.

Former Autonomy executives can still be found at high levels across all of Invoke’s current portfolio companies, including Darktrace.

Those links have already put Darktrace shareholders under the spotlight. HP wrote down most of the value of Autonomy in 2012 and alleged improper accounting and disclosures. Sushovan Hussain, another of Invoke’s founders -- and Autonomy’s former finance chief -- was sentenced to jail for five years following a probe into the Autonomy sale.

Hussain holds 16,839,500 Darktrace shares, according to documents filed ahead of the company’s initial public offering. They were valued at more than 116 million pounds when the market closed on Friday.

Lynch and Hussain have previously denied any fraud, arguing that HP simply ran their business into the ground and that it had rushed into its agreement to pay a 60% premium for Autonomy, which wasn’t desperate for a sale.

Hewlett-Packard rejects Lynch’s version of events, and launched a civil case in London in 2015 seeking billions of dollars in damages over its $8.8 billion Autonomy writedown. The much-delayed verdict is still months off.

Lynch denies wrongdoing in both the criminal and civil cases. “Dr. Lynch was already a wealthy individual before HP’s acquisition,” the Invoke spokesperson said.

Darktrace said it cooperated with U.S. Department of Justice subpoenas in 2018, and doesn’t believe it’s the subject of an investigation. Neither Lynch nor Hussain have made direct investments, it said.

In a statement, Darktrace said it is “delighted by the warm reception we have received from the market” in London. The company said its pre-IPO prospectus “includes a comprehensive assessment of potential risks according to the standards required” by the U.K.’s Financial Conduct Authority.

Invoke excelled at reuniting Autonomy’s old employees at a collection of newer companies. While Darktrace is the investment firm’s only large exit so far, it was enough to make a number of Lynch’s colleagues millionaires.

According to an analysis of Darktrace’s IPO documents, Autonomy veterans Peter Menell, the former chief technology officer, Vanessa Colomar, who was senior vice president of communications, and ex-General Counsel Andrew Kanter, have a combined stake valued at about 166 million pounds.

Still, the Justice Department has been aggressive in pursuing former Autonomy management, a posture that poses risks for Lynch and his associates, according to Nicolas Ryder, a professor of financial crime at the University of the West of England in Bristol.

“I’d be worried if I was an investor or director, especially if the DOJ succeed with Lynch’s extradition to the U.S.,” Ryder said.

“The forfeiture provisions are very broad reaching. If they can go after money that is said to be the result of illicit activity, they will.”