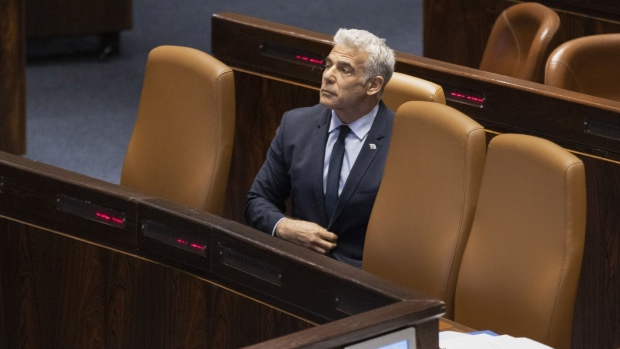 Yair Lapid, Israel's foreign minister, during a cabinet meeting at the Knesset in Jerusalem, Israel, on Monday, June 27, 2022. Israel is heading for its fifth election in less than four years as the fractious ruling coalition headed by Prime Minister Naftali Bennett collapsed following a series of internal disputes. , Bloomberg

(Bloomberg) -- Israel’s new interim prime minister, Yair Lapid, will depart on Tuesday morning for a meeting with French President Emmanuel Macron in Paris that’s due to focus on regional issues including talks to return to the 2015 Iran nuclear deal, and Israel’s disputed maritime border with Lebanon.

During the visit, which was initially planned by former prime minister Naftali Bennett before his coalition government collapsed last month, Lapid intends to raise the attempt by Hezbollah to fly three surveillance drones towards an Israeli oil rig in contested waters, according to a senior Israeli official.

The two leaders are also expected to discuss talks to return to the Iran nuclear deal, which Israel has long opposed, and Israel’s plans to boost gas exports to Egypt following the arrival of the floating oil rig last month.