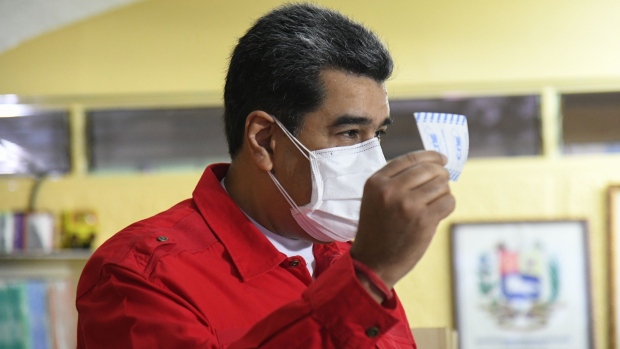 Nicolas Maduro casts a ballot at a polling station during regional elections in Caracas, on Nov. 21. Photographer: Carolina Cabral/Bloomberg , Bloomberg

Results in the western, cattle-raising state of Barinas, birthplace of the late President Hugo Chavez and ruled by his family for more than two decades, still haven’t been published after Sunday’s elections. The opposition and ruling party candidates have both claimed victory, while the electoral authority has so far kept silent.

A victory would provide some consolation for the routed opposition after a vote in which Maduro’s coalition won at least 19 out of 23 states and a majority of municipalities. The delays may raise doubts about the willingness of the authorities to recognize adverse results in future elections.

Hugo Chavez’s father and two brothers have governed Barinas since Chavez won the presidency in 1999. Now, a candidate from opposition party Voluntad Popular says he’s heading the tally by more than a thousand votes.

The opposition candidate in Barinas, Freddy Superlano, vowed to organize street protests if incumbent governor and Hugo Chavez’s brother, Argenis Chavez, is awarded the election. Chavez, for his part, said that victory belonged to him, and that he would defend his win.

The opposition coalition has already won the majority in the state council by just over 300 votes, according to official data. State council results generally maintain an almost exact correlation with the results in elections for governor, according to Venezuelan political consultant Carmen Beatriz Fernandez.