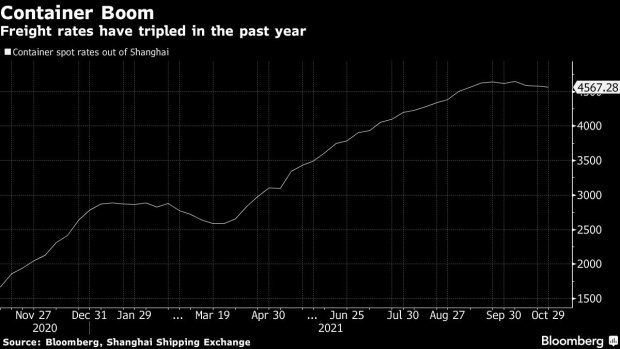 Shipping containers are unloaded from the Maersk Edinburgh cargo ship at the APM shipping terminal in the Port of Los Angeles in Los Angeles, California, U.S., on Tuesday, May 7, 2019. The terminal is planning to replace diesel trucks and human workers. It has already ordered an electric, automated carrier from Finnish manufacturer Kalmar, part of the Cargotec Corp., that can fulfill the functions of three kinds of manned diesel vehicles: a crane, top-loader and truck. Photographer: Patrick T. Fallon/Bloomberg , Bloomberg

The world’s largest shipping line said global ocean-based freight demand will grow between 7% and 9% this year, up from a previous prediction of 6%-8% expansion, according to a statement on Tuesday. Global container demand is projected to increase by 2%-4% in 2022, Maersk said.

Supply chains around the world have been thrown into chaos as shipping capacity has been unable to cope with a surge in demand for consumer goods, coupled with port disruptions caused by Covid outbreaks. Container lines like Maersk have been the big winners as freight rates jumped to record levels with companies desperate to secure shipments.

The Copenhagen-based company kept its own financial outlook and said it will grow less than the market in 2021.

Maersk, which had published some preliminary third-quarter earnings and raised its 2021 guidance on Sept 16., provided the following details on Tuesday: