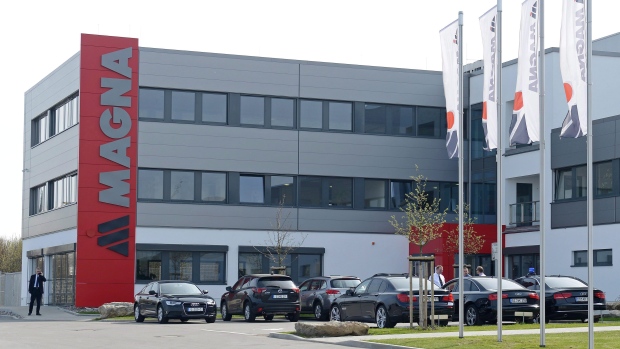 The tax, which Trump has been dangling over the heads of several carmakers that operate stateside, may not be limited exclusively to products crossing the Mexican border, spelling trouble for Canadian parts manufacturers.

“A big logistical problem is that the [U.S.] imports many parts and finished products that it originally produced,” BMO Capital Markets senior economist Sal Guatieri wrote in a note to investors Monday.

“In the case of autos, parts can cross the Mexican and Canadian borders several times. Will a U.S. automaker in Michigan be forced to pay the border tax each time one of its parts is imported back to the country?”

“Suffice it to say, the tax could wreak havoc on tightly woven supply chains for North American auto producers and other businesses.”

Evidence of Trump's ability to influence the companies involved all the way down the assembly line came into focus on Monday with one of Canada's biggest automotive contributors.

Parts-maker Magna International (MG.TO) was one of the key weights on the Toronto Stock Exchange on Monday after Donald Trump continued his “Made in America” rhetoric by threatening German carmakers like BMW, Daimler and Volkswagen with a 35 per cent import tariff.

Edgehill Partners CIO Jason Mann told BNN that despite today’s tumble it’s best for those that hold Magna shares – such as his firm – to sit tight.

“We don’t know where the rhetoric is going to turn into actual policy, so at this point all you can do is stick with owning stocks that are reasonably priced, that have growth prospects - Magna is definitely one of them,” Mann said on Market Call Monday. “The U.S, is obviously important to them, but it’s not their sole market.”

However, Purpose Investments CEO Som Seif told BNN that the rhetoric is just that and that Trump is using his Twitter attacks as a bargaining tactic.

“I think the style of this incoming President is one where he says what he wants, ultimately, as a trade negotiation tip,” Seif told BNN.

“The question is: Should we be taking this for face value? Will he be able to or would he follow through with these complex potential unwindings of global trade and what is viewed by many in the legal profession as illegal.”

Seif added that Trump has been seeing early results with these tactics by dividing and conquering an already fractured auto industry.

“It’s having an effect because this industry is weak,” he said. “The auto industry is sitting here, they’re having wonderful growth and no one is kind saying: ‘Hey maybe we should kind of talk together a little bit and kind of negotiate this in concert.’”

Guatieri said it’s unclear whether the border adjustment tax (BAT) could pass in its current form, suggesting that Corporate America is likely to lobby against it. This could result in a tariff targeting specific industries and companies, which he notes Trump might likely prefer.

However, Guatieri adds, the proposed BAT would do little to help the U.S. trade balance.

“The currency would normally adjust to equalize prices between the U.S. and its trading partners,” Guatieri wrote. “The higher cost of imports would be offset by the higher exchange rate, leaving relative prices between countries unchanged. That’s what the Econ 101 textbook says, anyway.”

As for the Canadian economy, the potential damage would largely depend on the loonie’s ability to withstand the hit to the nation’s exports and purchasing power.

“If their currencies did not fully adjust to the BAT,” Guatieri writes, “exports would get hit harder and their economies would weaken.”